As a wise person once said, you can never have too many lorries, and my slowly growing US forces don't appear to have any! Well, that isn't strictly true, I've got several OD Hotwheels generic US trucks I use for AK47, but I thought my chaps deserved something better. Later in the war, the Russians liked to drive around in US trucks too.

Trucks are one of those bread and butter things, but finding them in large numbers in an easy to assemble format at a low price is a challenge. Sadly Zvezda don't seem to have managed to supplement their Opel Blitz and Gaz AA with a 'Willys' or a 'Studebaker'. Even the Forged in Battle ones seemed unattractively expensive, despite being nice easy lumps of resin. Good old QRF do quite a range of US trucks at around the £4.50 mark each, so very reasonably priced, particularly for metal models. 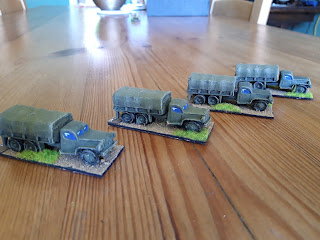 And here they are, hauling Coca Cola and ice cream for the boys at the front across the dining room table. You never quite know what you are going to get with metal models, and I was delighted to find that each of these had precisely three pieces. So, no fiddly sticking on of wheels and axles. Woo hoo! 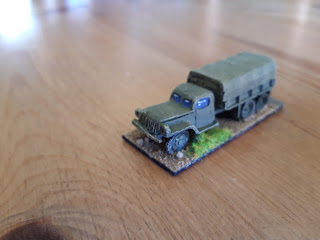 The three bits are the basic cab and chassis (with all the wheels moulded on), the rear truck deck and the canvas tilt. There was a very small amount of flash but the rear deck mounting was pretty crude. There were two locating pins  to keep it roughly straight, but the deck basically just rested on the wheels. I padded it out with blu tak to raise it a bit and it all stuck together fine. 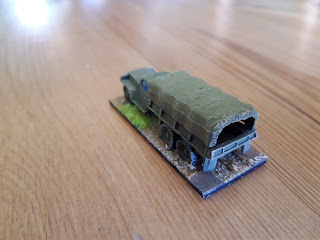 After some indecision, I put the tilts on. I should maybe have made them removeable, but hindsight is a wonderful thing and I was in a rush.. Perhaps a project for the future. You can see the panels are moulded nice and deep so very suitable for highlighting. 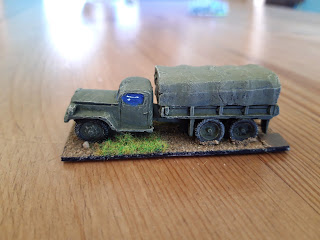 From the side you can see it sits slightly low, I should perhaps have wedged the rear deck up even more, but it looks good enough. I painted the windows my (now customary) blue with a bit of white highlight. The trucks themselves are just plain OD, although I did the tilts a lighter shade of OD, actually Vallejo Russian Uniform, to represent faded canvas rather than my more usual brown tilts.

I left them unmarked to so they serve with the US and Soviet forces, and who knows they may even turn up with the British Army from time to time. Like the Dodge Ambulance, a good workmanlike wargaming model and excellent value.