John put on another outing of Don Featherstones WW2 Commando rules, this time set in late 1943 as part of 'Operation Hard Tack', the series raids aimed at gathering intelligence on the Atlantic Wall. These were typically conducted by quite small groups of commandos.

Our plucky heroes were directed towards this sleepy looking French village, flanked by beaches and lighthouses. Our team of nine commandos was armed with a mix of tommy guns and rifles plus some demolition charges. Nick, Nog and I each took a group of three. 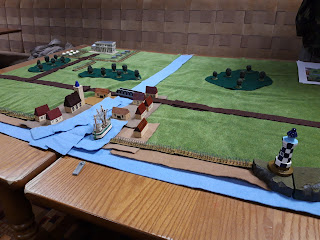 The beaches were defended with barbed wire,  but otherwise we had almost no intelligence on any likely defences. 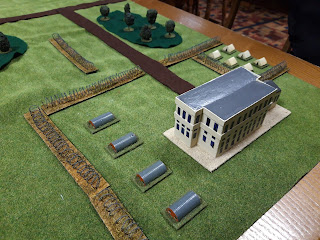 The main object of interest was the local German HQ (re-using the Chateau from the Pegasus Bridge game). Some mysterious tents had appeared in the grounds, so our mission was to go and find out what they were.

Sadly it was so dark our landing on the small beach flanked by cliffs has gone unrecorded. Perhaps a good job as German lookouts in one of the lighthouses spotted us and we were forced to open fire to even get ashore. 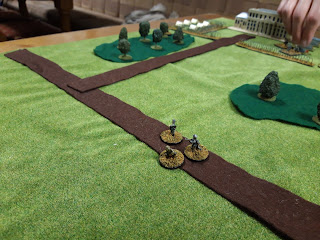 After that spot of unpleasantness, the Germans were thoroughly awake. This German patrol was heading for the sound of gun fire, so two of our groups overwhelmed them and managed to take a prisoner. 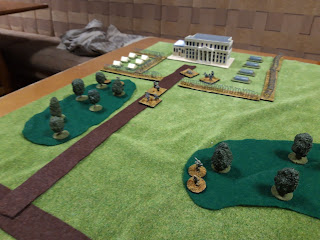 Sadly by now German soldiers were pouring out of the German HQ. Nicks group laid low and waited for them to pass so he could sneak up on the tents. Meanwhile twO of Nogs men lay in wait to ambush the Germans. 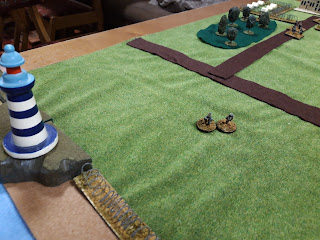 His third man escorted our precious prisoner back to the landing craft. 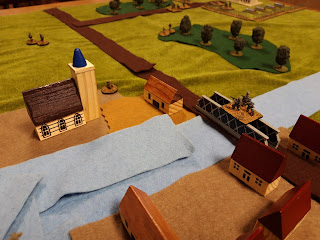 While all this was going on, my sole survivor (it had been quite a scrap overunning the patrol) sneaked into the village and discovered a German patrol on the bridge. 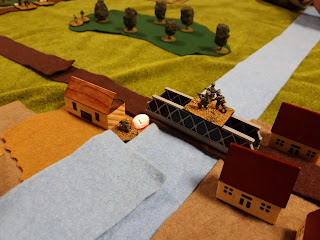 I managed to lay a demo charge on the bridge right under their noses. That'll show Fritz! 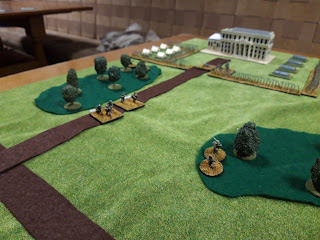 Nogs troops sprang their ambush. Although they managed to bring some of the Germans down, the German return fire included an MG42 and we rapidly lost the firefight. 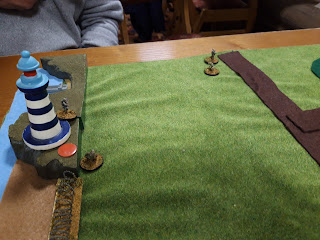 Under cover of all the commotion, the rest of us rallied at the lighthouse. Nick hadn't managed to get into the compound, but at least we had a prisoner. For good measure we put demo charges on the lighthouse. 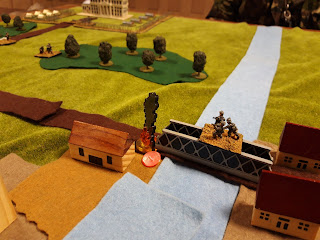 As we piled back into the landing craft, the charge on the bridge went off, which was something of a surprise for the Germans on the bridge. 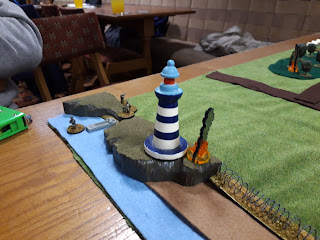 And the lighthouse blew up spectacularly. 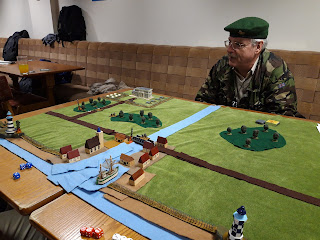 John debriefed us. Although we'd lost over half our men, we'd actually achieved our mission as the prisoner spilled the beans about the mysterious tents - they were Organisation Todt workers, preparing to build substantial concrete defences. It was a bit unfortunate that we were spotted so early on, but in true  Commando fashion, we pressed on until the mission was achieved.

That was a lot of fun, even if things did go horribly wrong from the outset. I am somewhat envious of Don Featherstones ability to write rules which capture the heart of the problem without being overmired in excessive detail.