Shock on the Seret - Kurovtsky

I'm sure you've all had enough of my holiday snaps for now, so here is a proper game report. In late March 1944 with the Siege of Tarnopol well under way in the Ukraine, 4th Panzer Army was reinforced with three freshly raised infantry divisions, a Stug Brigade and 507th Tiger Bn and ordered to restore the situation.

This is the first of a series of games in a mini campaign covering the 507th Tiger Bn in March 1944. The first scenario covers 357th Infantry Divs attack against the 60th Army bridgehead over the Seret near the village of Kurovtsky on 23rd March 1944. 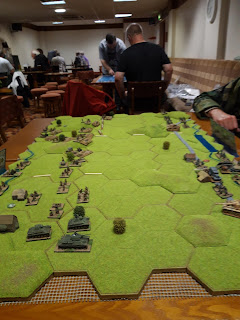 View from the north. Kurovtsky is to the left, and the main Tarnopol-Lvov highway to the right. The Russians are deploying 96th and 283rd Rifle Regiments of 140th Rifle Div. The division only has 5,000 effectives so is on the intermediate reduced strength OB (two battalions per regiment). Tim C took the Russians. The Germans have a Regiment from 357ID, commanded by John and Tim G. 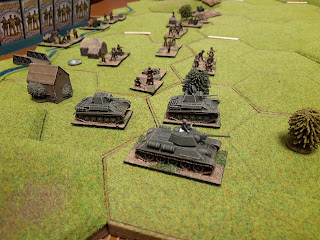 140th RD is also supported by 59th Independant Tank Regiment. Like many ITRs, it is still on the 1943 OB with a mix of medium and light tanks. The Regiment is supporting 283RR, which is tasked with cutting the Lvov highway. 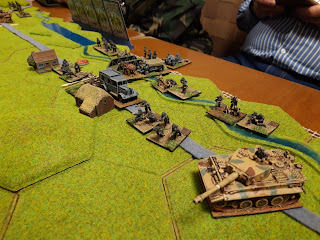 Over on the highway is a battalion of 357 ID, mainly composed of half trained 18 year olds. They do however have lots of mortars (6 x 81mm and 4 x 120mm) so I gave them two mortar companies, as well as a Tiger, representing half of  the 17 Tigers from the 507th which fought there on the 23rd. The regimental infantry gun and AT companies are also present, as is a battalion of 105mm howitzers off table. 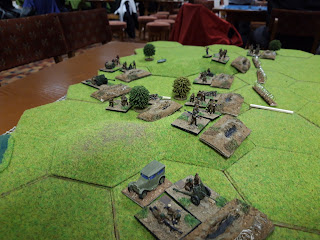 The 96th Rifle Regiment was given a defensive mission, so dug in, supported by a battalion of 76mm field guns, the regimental 120mm mortar company and a reinforced AT company. The Regimental SMG and anti-tank rifle companies were distributed among the under-strength rifle battalions. 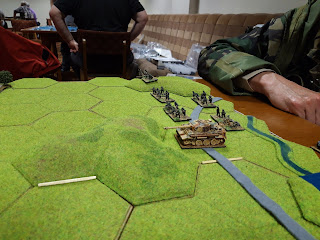 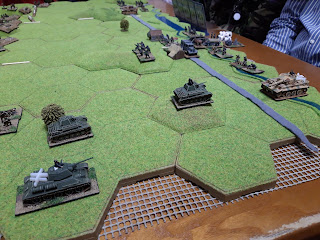 The action opened with a headlong dash by 59th ITR for the Lvov road.  The T34s got a bit shot up, but the wave of armour forced the Tigers to withdraw. 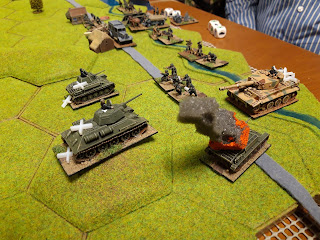 The Russians pressed on, and took heavy losses from the massed defenders. 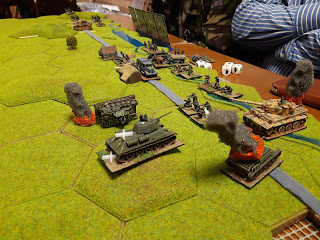 All the T-70s were knocked out, and only a depleted T34 company was left. The last Tigers were disabled in the melee though. 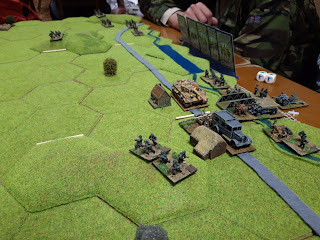 The Germans started to push forward to sieze artillery  observation posts, having repelled the armoured assault. The Tigers from the other flank rumbled down the highway to join the left flank. 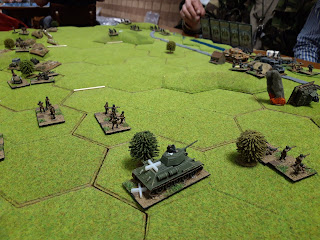 The surviving T34s pulled back as the Russian infantry moved up. 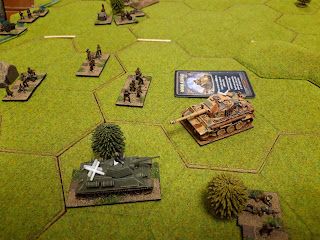 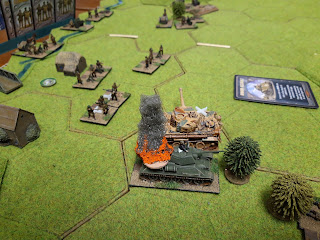 The T34s were despatched and the Russian infantry driven back. 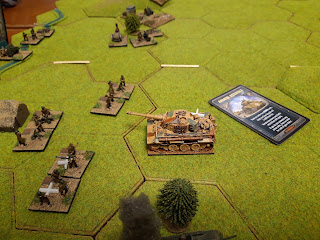 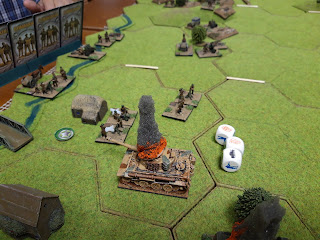 Although this pushed the Russians back to Kurovtsky, it came a cropper in the close quarters fighting as the defenders rolled three hits on the Tigers. 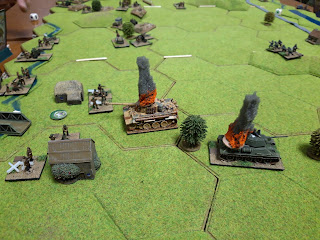 So, by now all the armour was ablaze and the Russian infantry had been thrown back to their start line. 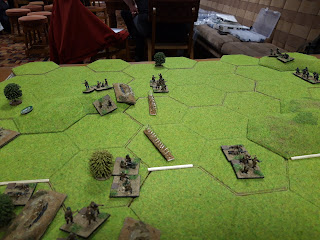 Over on the other flank, a Russian infantry assault got underway to try and cut the road. They had to dismantle their own wire obstacles on the way. This assault was cut down in a hail of artillery fire and the Russians became exhausted, ending their attack. 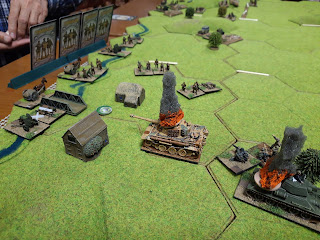 German infantry followed up their advantage and pressed on towards Kurovtsky while both sides fed in reinforcements and a rain of shells fell on both sides. Eventually it became obvious that the Germans weren't going to take the town. 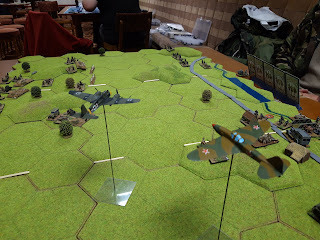 Some aircraft put in an appearance as we called it a day. Well, they were in the box of toys...

Both sides essentially ended up back on their baselines, but as the Russians were exhausted and the Germans weren't, we gave that to the Germans. It was surprisingly close to the original result where both German infantry assaults failed but the Tigers drove off the Russian armour and the battle degenerated into an artillery duel. What we didn't have was a lonely group of Tigers roaming the lines behind 96th RR, but Johns heroic tank attack on Kurovtsky came close.

That all seemed to work OK, there are few tweaks to tidy things up and make them more consistent but on the whole that was a good outing for Memoir 45. The game itself threw up some more suggestions, so I'll do a more general revision and release it as Memoir 45 version 3. I don't think the free setup worked very well, although it was less scenario design work for me, so I'll have to have a think about that. Focusing on terrain and scenario objectives was interesting, rather than just destroying enemy units, but it all seemed to take much longer than a regular game, so some food for thought there.