The good old Mobelwagen (furniture van), who said the Germans don't have a sense of humour? According the Chamberlain and Doyle, this clunker was actually called Flakpanzer IV (2cm Flakvierling 38) auf Fgst PzKpfw IV, and entered service in 1943 along with the 37mm version in the Flak platoons of panzer battalions. 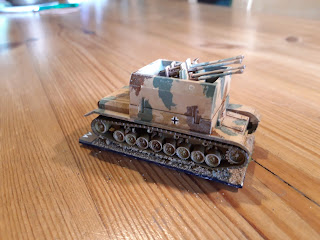 What a ridiculous vehicle, but better than a Flakpanzer 38(t) I guess. I never owned one of these before, but I did convert an Airfix Pz IV into one (using a spare Roco Flak Vierling mount). As I've been looking at higher level 15mm games I thought I'd better invest in some more Flak for the Germans and this was sitting on the COW Bring and Buy, so hard to resist. 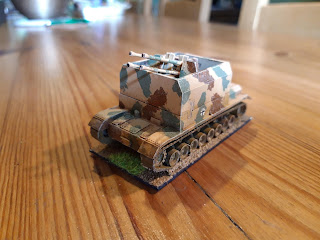 It is a big old beast, the chassis looks a lot bigger than 1/87th, but it will be mainly floating around behind the panzers so I don't think the size discrepancy matters too much. 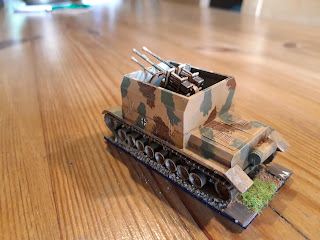 The engine rear is fairly crude as are the tracks and running gear, but these are ancient old models and good enough for wargaming. I could have painted up some crew, but given how unlikely it is to get used, I didn't bother. Maybe I'll make some if I plan a game using it. 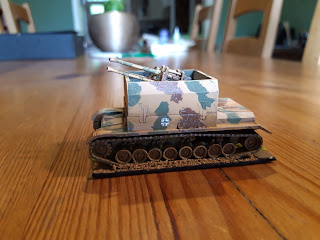 Just the usual late war German three tone camo and basic balkan crosses. The real things seemed to be fairly plain generally and I'm sure it will see service at some point. Into the 'less used' box with the Elephants, Jagdpanthers, Pz Is and T35 it goes.