Hannants had some Li-2s in stock, so I bought three. They were licence built Dakotas, and a cheap source of easy build Dakotas is not to be sniffed at. 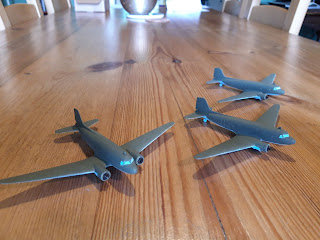 They certainly look like Dakotas. The models are pretty big, so big that I had to double check that they really were 1/200th and not 1/144th. They are much, much bigger than the SB-2s 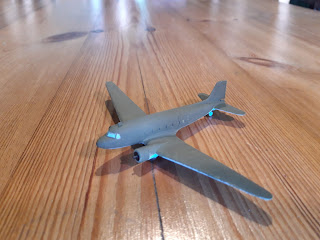 They don;t have many parts and go together well. The only really fiddly thing is that the cockpit and side windows are a single piece of clear plastic, and they sort of click into place (or not) when you push both halves of the fuselage together. If doing these again I think I'd just do the cockpit windows and leave the rest as open apertures as I certainly don't intend to paint a bunch of tiny windows on. 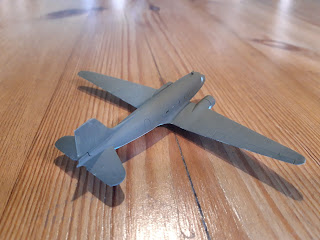 The other Soviet oddity is that there is no astrodome and instead there is an upper gun turret. Well, its a plane so I guess it has to have a gun. It wasn't too hard to trim back the locating pieces and fill the gun turret aperture so it looks more like a regular Dakota. 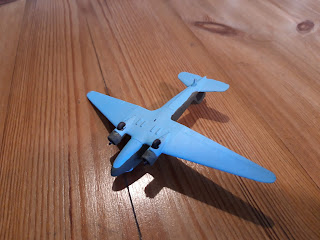 Plain underside as ever. Woops, looks like I forgot to paint the tailwheels! The only other difference from a US Dakota is that it looks like the Russians didn't use standard radial engines. The cowlings look much more like those on a Rata or early SB-2, either that or they are appalling mouldings. I just painted the front of each engine black and did the cowling covers carefully in OD so from this distance they look like normal engines. 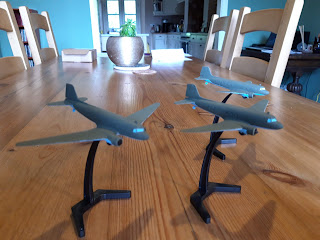 Off they go to drop some paras or supplies. I did them in plain OD (VJ Russian uniform mixed 30% with VJ Bronze Green) so I could use them for anyone. At some point I may add some markings, but I'm not to worried for now as they can act as generic transport planes. I must fix those tail wheels though.