Another offering from Zvezda, the M3 Lee, a.k.a. The Grave for Seven Brothers by Russian tankers who served in them. In fact they weren't as bad as that and served in the British, US and Russian armies until 1945.

I fancied picking up a few of these partly to use with my Russians, but also with some potential use in Tunisia with US forces and Burma with 14th Army. The Russians generally assigned them to independant tank regiments, although some Tank Corps were issued them in 1943, and it was in ITRs that they served right until 1945, often still paired with M3 light tanks. 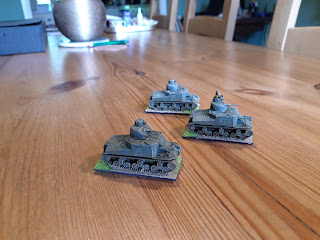 I got three of them, which seemed a reasonable number. 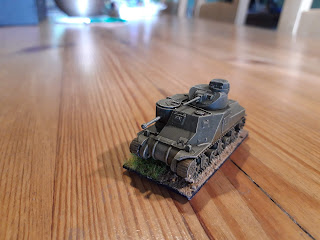 They are exquisite models, beautifully detailed, crisply moulded and very delicate. The sheer number of parts is a bit intimidating but they went together far more logically and easily than the Zvezda Panthers. I found snap fitting the main parts then fixing them with glue worked best as it gave a bit of flexibility in aligning the joints of all the plates. Once I'd done the first, the other two were much quicker. 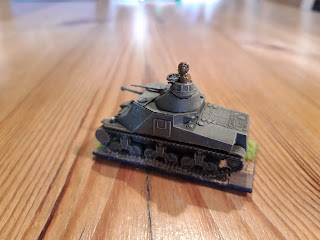 They are supplied with the hatches shut, so for one I borrowed a crew figure and a spare hatch from a Sherman and it ended up looking a fair bit like the photos of M3 commanders perched high up in the air. I've never seen a real Lee, but the Grant in the Imperial War Museum was impressively big and I imagine the MG cupola on to made it even taller. 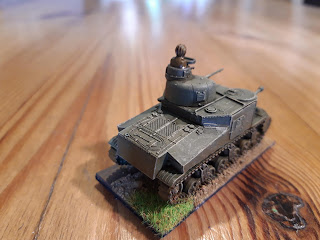 Lovely moulding on the engine deck, and you can see the fine track detail. Much better than some of the earlier Zvezda efforts (the tracks on the Stug IIID are very crude). As usual I painted the running gear and tracks mud coloured and gave the whole thing a light drybrush of tan, which highlighted the numerous sharp edges, rivets and panels very well. 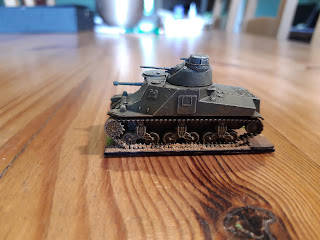 Normally I'd undercoat these black and then give them a mist of white, but this time I undercoated them Humbrol dark green and then mixed up some OD (60% VJ Russian Uniform and 40% VJ Bronze Green) to go over. It wasn't hugely successful as it ended up looking really flat and I had to apply multiple layers of lighter drybrushing to get any depth. I wish I'd stuck with my usual method of Russian uniform over the black undercoat and then a wash of Bronze Green. They came out OK in the end  but have about five coats of paint on them. I didn't bother with any markings so they can be 'international' and they look good enough plain.