Along with the D. 520, I thought the French could also do with some heavier air support. French bombers of the 1930s were certainly original, but towards the end of the 30s some more sensible designs (which didn't look like airborne bits of furniture) began to turn up.

As 1/144th scale 1940 French bombers are a bit rare, I was looking for something to bodge up, and the  Bloch MB131 bore a passing resemblance to a Blenheim, which is handy as Zvezda make a Blenheim in 1/200th scale. 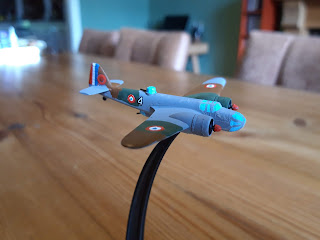 And Lo and Behold, an MB131 takes to the air. These didn't actually serve as bombers but as fast recce, but if it looks like a bomber, sounds like a bomber... This one took a fair bit more bodgery than the D. 520 as for some unaccountable reason, the wierd asymmetrical nose of the Blenheim didn't seem to feature in other aircraft. It also had a ventral gun pod. The nose just took a moderate amount of filler and sanding to make into the more rounded Bloch nose. 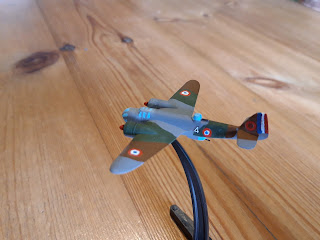 The tail on the Bloch was also more angular than the Blenheim, so a certain amount of cutting and sanding took place, particularly on the elevator. The one thing I couldn't fix was that the wings should be on the bottom of the fuselage instead of halfway up, but it was good enough. Like the D. 520 I did this in the grey/green/brown scheme and hand painted the roundels. 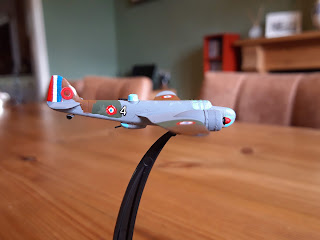 The ventral gun turret can be seen in the profile view here. I made it up out of sprue with a lot of sanding to get it into the teardrop shape, and added an MG from 0.5mm brass. This plane has its number on the fuselage and its squadron flash on the tail, another decal from the good old Emhar Mark IV box. I did the spinners red for a bit of contrast. 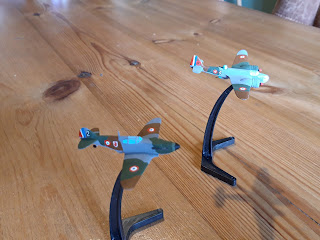 Here it is in flight being escorted by the D. 520. It looks a bit small as it is far away. not 1/200th scale at all.
I was very pleased with how that turned out. I've no idea when it might appear in a game, but I'll have to design a scenario which might feature it.