Simon put on a game using the Pz8 WW1 Division/Corps rules. I'd looked at these previously but thought they looked a bit overly abstract for my usual outings to WW1, but given the option to actually play with them, I was keen to give them a go.

They are pitched at a similar level to my own Drumfire with battalion sized stands and roughly a Corps on the table. The artillery is abstracted out as a set of support points which add to attacks.

This was a scenario based on Cambrai, Tim and I had the British with the equivalent of three infantry divisions, plus some tanks and a cavalry division arriving later. John and Mark were the wicked Germans. 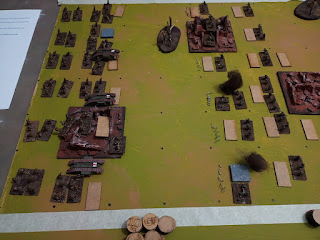 View from the south. British on the left. An interesting feature of the game is that a square can only contain four 'things' which include field defences, so if you fill a square with trenches, it reduces how many troops you can put in. This is actually a very clever mechanism as it doesn't impede the defender too much, but it is an utter pain for an attacker as it dilutes combat strength as you advance into the defences.
A key feature of the German defences are Bourlon village and Bourlon wood, which the Germans packed with barbed wire and machineguns in the top centre. The woods protected it from tanks, and the wire and MGs made it into  fortress.
The Germans also put a wired bunker complex in their front line, which we spent some of our artillery points on to bombard and were lucky enough to destroy it. We didn't go nuts on the bombardment as we didn't want to cut the ground up any more as it was hard enough to deploy the tanks anyway. 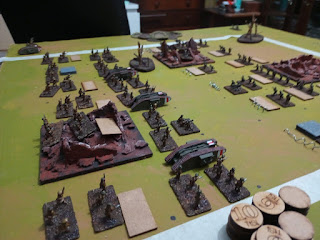 Our chaps rolled forwards into Nomansland. The wood counters are the remaining artillery points. In the basic game artillery is only put into assault combats, and we kept it that way in the interests of simplicity. Tanks are at risk of getting stuck if they move, which keeps them in the square for the rest of the game, although they can still fight.

The British horde from the front. As we'd put some defensive trench lines down, we were generally limited to three units per square and the tanks had to avoid the woods and villages. We mainly had infantry, plus a few MG companies. The MGs were less useful on the attack but good defensively. 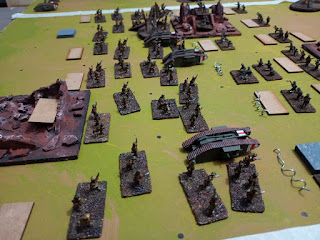 We made it to the German front line and all hell broke loose. Combat is resolved as one square vs one square, and simply compares the strength of the opposing units and fortifications. The randomness comes from the amount of artillery support allocated and defensive MGs whose final effect on combat strength is randomised. The German defences made life for the attacker very hard - each battalion was worth 1, wire another 1 and a trench 2, so a single battalion in a well fortified square has the same strength as an entire brigade assaulting it.
We attacked along the entire line, and dumped artillery along the entire front (which used up about a third of our artillery ammo in a single turn). 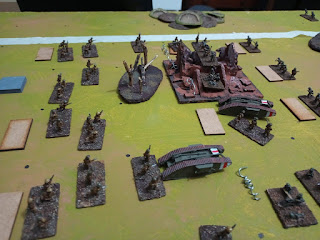 As might be expected, the results were mixed. We managed to overrun a lot of the Germans front line, but Bourlon held out and the attackers were massacred here. 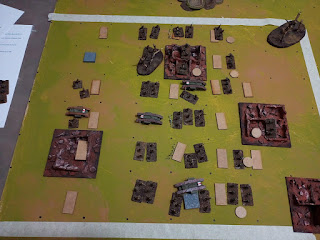 Aerial view of Allied progress after a couple of turns fighting. The whole German front line, apart from Bourlon, is in British hands. The Germans second line is largely intact, but there is a gap in front of the village (with a reserve battalion behind). Two of the British tanks are now stuck, but the cavalry and another tank have arrived from the west. 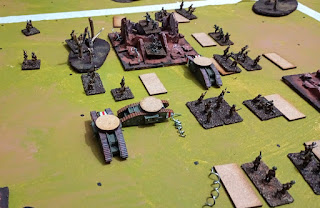 Now it was a matter of grinding. We had to pick our fights as artillery ammo was running low, we'd also sustained losses and the limited movement of our infantry (oh how nice it would be to move diagonally) made it hard to concentrate for each assault. So we nibbled away to clear the German second line.
The real problem was Bourlon, which was still packed with German wire and MGs, and we needed to clear the whole German front line for even just a marginal victory. Another brigade level assault went down in a hail of MG08 fire. 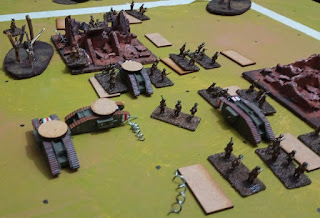 With some judicious shuffling we managed to get some more infantry up to join one of the disabled tanks, and made one final effort on Bourlon with all that remained of our artillery. The German threw in what shells they had left too, but the dice gods were with us and our guns rolled high while theirs rolled low and we just squeaked into Bourlon by the skin of our teeth. Hurrah!
With both sides exhausted we called it a day there with a tactical British victory.
Despite my misgivings on the reading the rules, that was actually a very good game. Very thought provoking, with lots of interesting and meaningful decisions to make, and it just shows you need to play things through to do them justice. They were good enough to warrant a replay, and I'll ponder a suitable scenario in due course.