John put on another eighteenth century game using Brown Bess, this time went off to the Battle of Lobowitz in 1756. Frederick the Great faced off against General von Browne and the reformed Austrian army on the Elbe.

We were a bit light on numbers for this one, so myself and Mark took the Austrians, while Tim and Tim took the Prussians.

The battle was fought on a foggy morning in the Elbe valley as Fredericks army debouched from a mountain pass. He wasn't sure what was ahead, but decided it was an Austrian rearguard and attacked. Little did he know that von Browne had laid a trap... 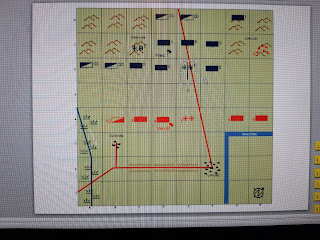 This is what things looked like from the Prussian pov (Blue units). In fact there are a ton more Austrian  (red units) units lurking in the mist in the marshes and along the sunken road. We kept track of those secretly. Hard to see in the screen shot, but there is a brigade of elite Grenzers in the hills on the top right. 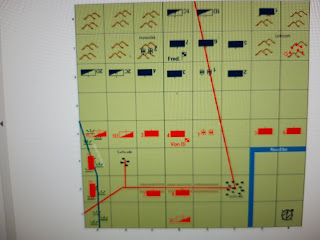 This is what the Austrians actually had around Lobositz. Four additional infantry units and a pair of Cuirassier units, all hidden from the Prussians! 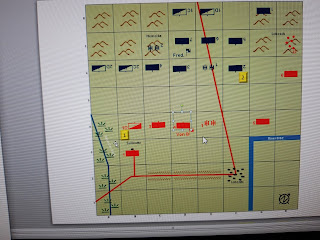 The battle opened with a cannonade. This was fine from my pov as it gave a chance to push the two Austrian brigades with their backs to the Elbe forward and support the Grenzers. The odd hit the Prussians inflicted I could just rally off. I was also able to move some units to garrison the BUAs, which proved to be crucial. 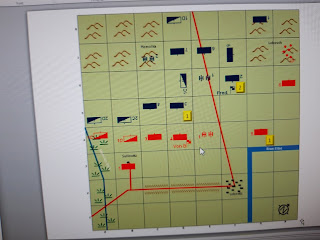 Eventually Frederick got bored with this as he realised it wasn't having much effect, and moved to contact. This revealed a few more Austrians, and their defensive fire wreaked havoc. The Austrian artillery was particularly effective at close range. 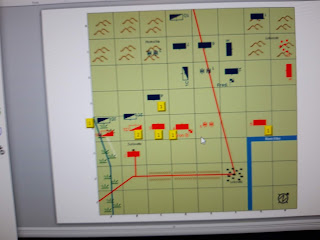 Contact was made on the Austrian left. One of the Prussian infantry was routed by point blank cannister fire, but the elite Prussian cavalry engaged our horsemen in melee. 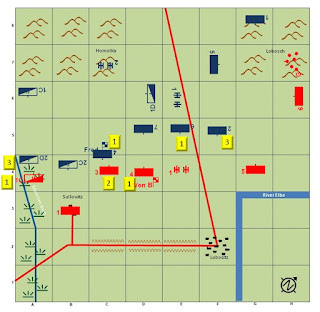 The Prussians rolled forwards in dribs and drabs. One of the Austrian cavalry was defeated, which just exposed the French to close range musket fire from the village. Meanwhile the Grenzers had managed to tie up two entire Prussian brigades. 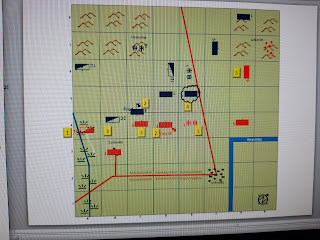 A bloody point blank firefight raged, but our chaps were supported by close range artillery and defending buildings. The Austrians had the edge and the Prussian infantry began to disintegrate. 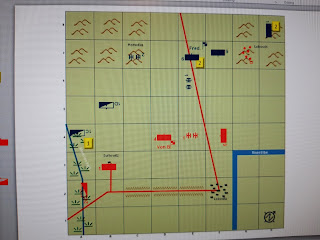 After a few turns pounding, there wasn't much left of Fredericks army. The Prussian cavalry found out the hard way that defended villages flanked by swamps are really hard to take. 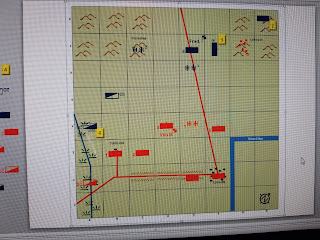 The Austrian reserves now appeared, and Prussian morale plummeted. The Grenzers also turned out to be really tough in the mountainous terrain and shattered the Prussian infantry stalking them. 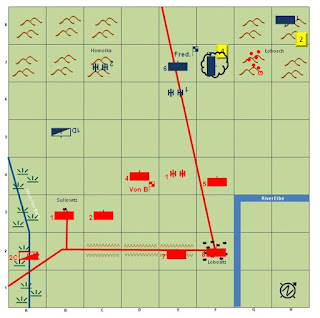 The Austrians began to close in on the remains of the Prussians, and realising he was now outnumbered 2:1, Frederick decided it was time to withdraw. The Battle of Lobositz was over. Ah well, in real life it was a close run thing too, and Frederick was still learning his trade but managed to pull a victory out of an unpromising situation.
As someone who has played with Austrians a lot, it was very pleasant playing with some Austrians who had a degree of professional competence. Well done von Browne for reforming the army so effectively.