Like the BTs, I've got a fair number of Russian T28s in 6mm but none in 15mm. These old clunkers were getting fairly rare in 1941, but there were still around 500 vehicles in the medium tank regiments where the Russians hadn't replaced them with T34s or substituted a horde of T26s instead. 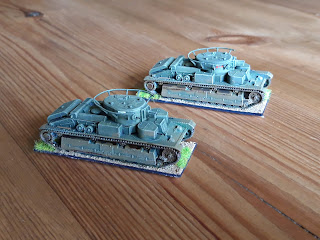 What grand vehicles they are. Typical interwar medium tanks, all too many turrets, ludicrously angular and very, very big. If the T35 is a land battleship, these are land heavy cruisers. I only got two as they are surprisingly hard to source. One of these came from Hannants, the other from Bovingdon Tank Museum, which has an excellent online shop. 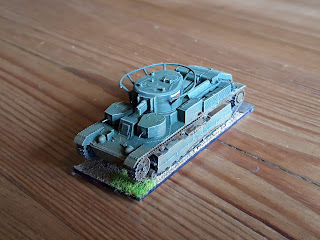 These are on the more complex end of Zvezda but went together fine. The tracks are really, really thin so you need to be careful getting them off the sprue - I imagine this might have been a bit of a problem on the real thing in terms of ground pressure.To my huge relief the radio rails were moulded on in one piece, unlike the horrible Minitanks rubbery bits and pieces on their T35 which I ended up just throwing away. 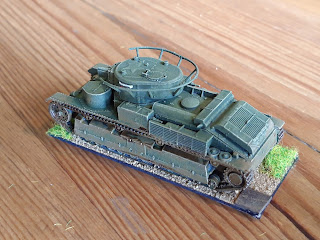 The entire rear engine deck seems to be covered in air vents and pipework of various kinds. Just what you need if someone drops a Molotov Cocktail on it! Loads of nicely engraved detail which really stands out though. 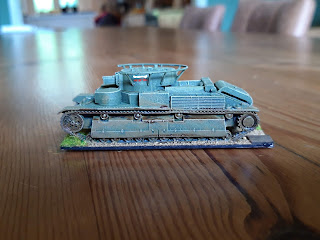 Side view. It sits very like the real thing and reminds me of the Vickers Independant at Bovingdon. I really like the hang of the thin tracks over the return rollers.
Like the BTs, I did this in a base coat of VJ 894 and then did a heavy drybrush of 894 mixed with ochre to turn it into faded Russian green. I topped it off a light drybrush of Iraqi Sand and mud around the running gear and on the tracks. I put the early war battalion/company colour bands on the turret, which was a bit of a challenge with the rails in the way but they make a nice contrast with the overall green. I just did a short run of colour instead of a full turret band (photos show both as options) as my hand isn't steady enough to paint a complete band. 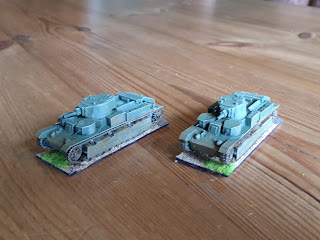 A very nice bonus is that you also get the long barrelled 76mm turret included as well, so you can pretend they are upgraded T28B/Cs and give the Germans a nasty surprise (60mm of armour!). I applaud all manufacturers who give you multiple turret options in the same box (like the PSC T34s).
These are just lovely all over, and I'll have to sort out a 1941 scenario as an excuse to use them.