Much as I've enjoyed the two virtual Conferenceof Wargamers during lockdown, it was nice to be back at Knuston Hall in person. There were some restrictions on activities due to the pandemic but nothing too onerous. It was the usual Friday afternoon motorway hell, but I got there OK and suddenly everything was very familiar. 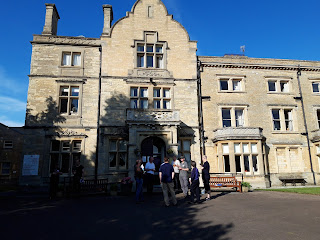 The hall was bathed in sunshine, typical COW weather. Lovely to be back! 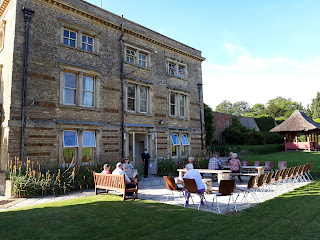 There were loads of extra seats setup outside, so plenty of room for us to meet up in a socially distanced manner.
It was lovely to see so many familiar faces again, although by the miracle of Zoom etc, we've been keeping in regular contact. The hall staff had worked miracles of organisation in terms of the accommodation and in particular meals. It was very, very slick and felt very safe. If anything, the food was even better this year, and even more welcome as I didn't have to cook it myself. Great stuff, and well done Knuston Hall.
Plenary Game. Changing Horses.
John Bassett organised the first session, big committee game covering the attempts by Hungary to extricate itself from WW2 in late 1944. We all had individual roles, briefings and objectives, and the game was played outside so we could safely mingle. Fortunately the weather was kind, although it got a bit midgey later. Not ideal for those of us in shorts!
I was cast as CinC, Army Group South, along with a small German team, trying to keep the Red Army and the treacherous Rumanians away from Budapest. My personal objectives were to escape with my mistress and as much loot as possible, but given my high profile and constant oversight by the Reichsfuhrer, opportunities to get away were very limited.
I did manage to put out some feelers via the Swiss embassy to flee to the west, but had little to offer in terms of assets, and similarly, I managed to make contact with Soviet intelligence, but outside of unconditional surrender, there was little that they were interested in. I did try to bargain with the heavy water plant and research papers, but the Professor went into hiding and was spirited away.
In the end, I decided just to focus on the military situation and saving as many of my staff as possible. We successfully blunted the reluctant Rumanian offensive, then switched our main forces to the Danube plain. The Hungarian army was now falling apart, and only German units were putting up a fight. A counterattack by SS panzer divisions blunted the main Soviet thrust in the centre, but we had nothing left to hold the flanks and a Tank Corps established a bridgehead over the Danube. With that I took personal command of the Budapest garrison, and went down fighting with the last five Tiger tanks and Wagner playing.
Meanwhile, my more cunning subordinates had managed to loot the local museums and cathedral for treasure, and loaded them onto disabled tanks being transported back to the Reich, then made their escape. Germany will need people like that to rebuild itself after the war.
So that was a great introductory game and worked really well. Many thanks to John and his Co umpires.
Men Against Fire
For the late evening session,  I went to Men Against Fire, run by John Curry. This was a set of tactical WW2 rules originally developed by Paddy Griffiths, and modelled on SLA Marshalls combat interviews about what actually happened under fire, reinforced by Rowlands later operations research in 'The Stress of Battle'. The essential thesis being that only a small proportion of people are natural fighters, a bigger proportion only contribute if directed, and the rest contribute very little of use at all. A bit like being at work then. 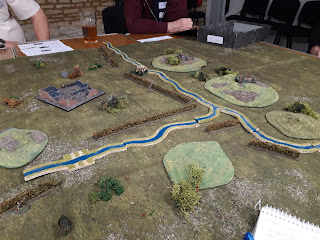 Nick, Mike, Chris and myself were given a US rifle squad to run, and we had to advance from left to right. Chris was the squad leader plus a couple of riflemen. Nick had the Bar team and a sniper, Mike had a. 30 cal from the company weapons platoon, and I had the scout section. 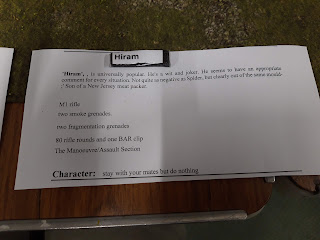 Each figure had a character definition. Hiram here was happy to tag along, but a non contributor. 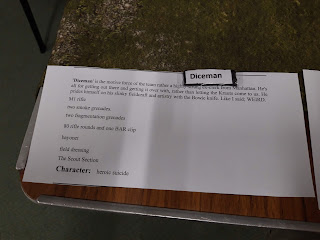 Diceman, on the other hand is a suicidal hero(!) and team leader, with good fieldcraft. My third character, Tweed, was Dicemans buddy. He wouldn't do much on his own, but would do anything to get Diceman out of a jam.
The other teams all had a mix of characters too, with a mix of motivated and unmotivated individuals. 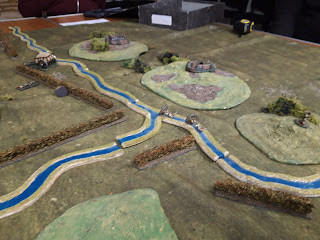 We then essentially conducted an advance to contact in a section wedge. My scout team took point, with the SL on the left, Bar teamon the right and LMG in the centre.
Diceman, being a hero, generally went ahead, then waved the rest of the squad. Eventually we came under fire from the ridge ahead, and judging from the erratic firing, the Germans had similar personality disorders to our own!
We attempted to advance by fire and movement, and the firefight was largely conducted by a handful of highly motivated individuals, whilst the rest tagged along or hid. Useless Hiram gamely kept up, while not firing a shot, but turned out to be a handy source of extra ammo and was also the only one with any smoke grenades. Unfortunately poor Tweed was shot dead trying to throw one as we closed in on the Germans.
Mike and Nick kept a very effective suppressing fire, and eventually both German positions were stormed, each by  single motivated figure(!). At which point we discovered the Germans had pulled back, leaving a single casualty behind.  We had one killed, one wounded and an awful lot of people cowering in effectively or manouvring/observing but not actually putting themselves in any danger.
I really enjoyed that, and it mirrors many of the tactical games I've run at platoon or company level, but I've not focused on the individual psychological aspects before, which gave much more weight to the role playing aspects. I suspect it worked well with a COW audience, as we are very happy to role play, but it would need some firm umpiring for a more competitive audience. That was a good session, and I was pleased that basic tactical drills still worked, as despite the small proportion of effective troops, the Germans had the same problems, so it all evened out in the end. As Rowlands observed, the function of most people in combat is as targets.
What a great day. Let's see what Saturday brings.