Sunday was a shorter day than Saturday, and the weather was considerably worse, but as we were mainly doing sessions inside, that wasn't a particular problem.  I did manage a walk to Knuston to get some fresh air first thing and after another vast breakfast, it was time to get going again.

First up was Marks ambitious game covering a fictitious UK-US conflict in the 1920s. I was on the good guys team, taking on the perfidious colonials who'd had the temerity to sink one of our destroyers! Something about violating coastal waters. Bah, we will soon show them. 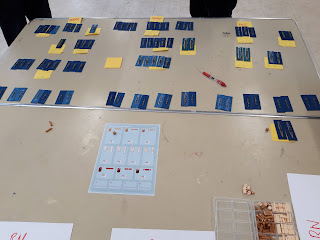 The Royal Navy. These are just the capital ships and carriers, plus some cruisers for support. As you may have already guessed, this fleet includes a fair number of the more eccentric potential designs. 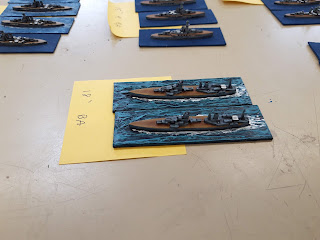 Core of the Home Fleet, this pair of 18" gun monsters. Essentially stretched Nelsons with huge guns and extra turrets. 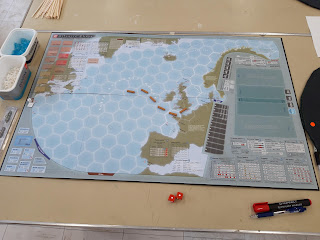 The game was moderated using GMTs 'Atlantic Chase' with a number of appropriate modifications for the period. Chasing the Bismark isn't quite the same as setting off with a twenty BB battlefleet... 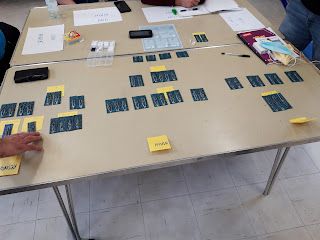 The USN, which also boasted a load of hypothetical super ships. But rather fewer than the Royal Navy had. To avoid a dull and one sided slug in the middle of the Atlantic, each fleet had to carefully choose its actions each turn, ranging from the operational manouvering to mobilising more of the fleet for missions at sea. Doing too much stuff risked handing the initiative to the enemy, so trying to get the entire RN to sea in a single turn was just going to give the US a free hand to invade Canada.
We essentially mobilised our fast battlecruiser fleet (which included Renown, Repulse etc) supported by carriers and cruisers, and piled it across the Atlantic to seek out the USN and inflict some tip and run reprisals. The early carrier planes were suprisingly effective, the recce biplanes at a range of 500 miles(!). They just weren't large complements, we had about 120 planes embarked, but eight heavy battlecruisers. 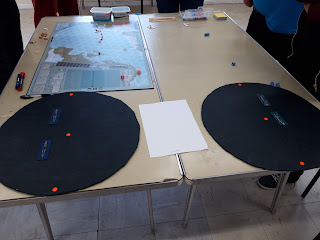 Surface actions were resolved on these battle boards. In this action, my BC vanguard has found a couple of US cruisers. 15" guns vs 6" cruisers isn't really much of a contest and after taking severe damage, the US ships laid smoke and broke off. 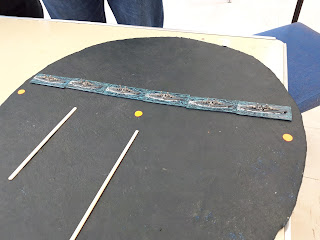 Unfortunately operating so close to the US home waters meant the USN could respond in force. The next encounter for my scout squadron was six battleships! 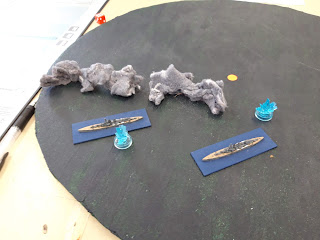 Time to lay smoke and break off while enormous shells splashed all around. 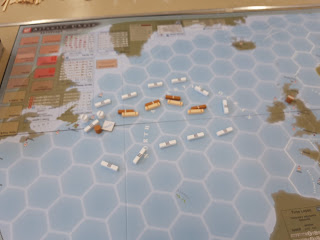 Track markers on the North Atlantic. The main action was off the cost of Nova Scotia as the US had their eye on Halifax. We had also despatched a task force to build up our presence in the Caribbean and cut the Panama Canal.
Our carrier fleet was just behind our BC group, so at this point we launched our secret weapon, carrier borne aircraft. Sadly they managed to roll a double '1' on the search roll! A shame, as I wanted to see the air rules in action. After that, sanity prevailed and the diplomats found a solution.

That was a lot of fun, but I was never quite sure if Mark intended us to end up fighting Trafalger in  the North Atlantic or not. It was a good run through to get a hang of of the command, mobilisation, search, movement and surface combat mechanisms, just a shame we didn't get much air action.

Mark had brought along a copy of Memoir 44 as he'd never played it before, and Mike and I volunteered to run a couple of sessions. I've really missed playing the CnC games as they don't work well over Zoom, so I was looking forward to this. I know you can play them online but it really isn't the same and doesn't incorporate my mods or an opportunity to use toys and Hexon. If I'm going ot play computer games, I'd rather play on my Xbox. 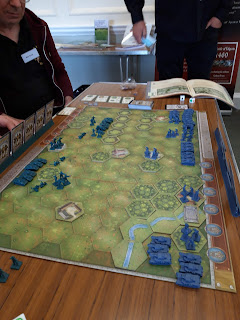 Mike picked out Arracourt as an introductory scenario as it has all three arms (tanks, infantry and artillery) but no special units and no wierd terrain types like beach obstacles. I'd forgotten how impressive the supplied toys all looked when laid out. This one used every single German tank model  and five infantry units (representing the Panthers, SP guns and panzergrenadiers of 111th and 113t Panzer Brigades) while the US had a  mix of infantry, tanks and artillery representing CCA, 4th Armored Div. 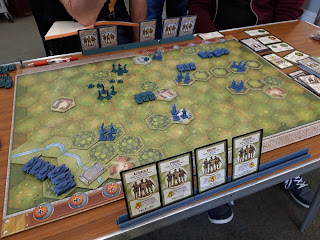 I took the Germans while Mike advised Mark commanding the US troops. The Germans were seriously handicapped by only having a four card deck, while the veteran 4th Armored had six. I just had to run with the cards I was dealt and mounted a series of disjointed attacks in various sectors of the front. I was careful to avoid exposing too many units to piecemeal destruction, but as the bulk of my forces were armour, I was forced to use armoured overrun attacks to maximise their combat power, which in turn left them vulnerable to counterattacks. 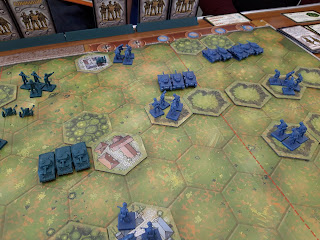 By end of the first game the Germans had lost over half their armour, but had overrun the entire US left flank and part of the centre. I've been playing this game along time I am now moderately competent. The US weren't far behind though, so that was a 6:4 German win.
Having played it once Mark had a much better idea of how it worked, so we swapped sides and ran it again. Mark took the Germans and Mike the US. Mark put together a very convincing armoured offensive and obliterated the US in short order, who were unfortunately handicapped by a run of right flank cards. I think the new deck hadn't been shuffled enough.
It was interesting playing the basic game again, it was good fun, but I'm so used to my mods now that some of it jars a bit. The simplest mod to make is simply allowing units attacked in Close Combat to battle back, it makes it less of a game winning tactic and avoids the defender just feeling like a victim. The other is to let players burn any card at all as an 'activate one unit' card. The later CnC games do both of these things and are much better for it, whereas Memoir 44 still has its roots in Battle Cry.

After Sunday lunch, John put on a talk/discussion session picking up on the themes covered in the plenary game. How exactly does a small country extricate itself from an unwinnable situation, and how to individuals deal with some of the moral compromises which may be required?

This was very interesting and thought provoking, and the discussion ranged across the varied experience of the Axis powers in particular. It also touched on some of the issues raised in the previous days Baader Meinhof game of individual and collective responsibility, and acknowledgement of the mistakes of the past.

Great stuff and an excellent way to end the weekend.

Well, what can I say. What a great weekend. It was fabulous to see so many old friends face to face, play some thought provoking games but also to have a laugh. My particular thanks go to Bob, Tim and John for organising it so well, but particularly the staff at Knuston Hall who were so well organised and with such slick processes in place to keep us safe and well fed.