Along with 15mm Fallschirmjagers, I also wanted some 15mm British Paras as they also seemed to crop up all over the place. I included these in my order to Peter Pig, and unlike the FJ, these are mix of sculpts of various ages. 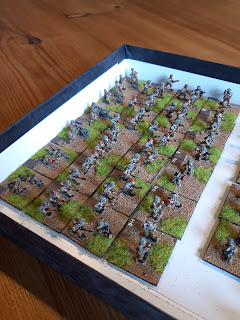 Here they are in their box. There are rather more of these than the FJ as the support options and unit compositions at battalion and brigade level are a bit more complex. Also if I wanted to do 1st Airborne at Arnhem at division level, it needs enough paras for four brigades to include the Polish brigade.
I designed the figure collection to do a para or airlanding battalion at one stand = one platoon, but with an eye to higher level games too, so I needed some extra bits too. I didn't worry too much about doing tactical games below company level. 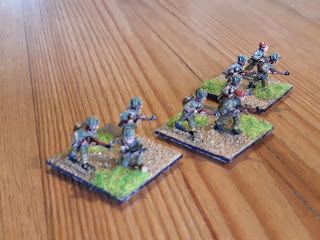 One of the rifle companies. I did these all the same as three stands on three figures, with a mix of rifles and Stens. In retrospect I should probably have got some Brens to mix in too, but I didn't. Hey ho. The figures are mainly 'advancing rifles' which is a good generic pose.
I did each company in different formations so I could tell them apart. A company is one up, two back, B company is two up, C company is three in line and D company (for those pesky four company Airlanding battalions) is in a sort of blob.
The figures themselves are mainly cast with scrimmed para helmets, plus a few in berets for a splash of colour. 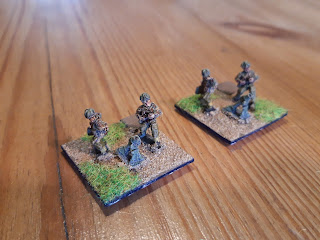 3" mortars. British para battalions had two platoons of four tubes each. I plundered the two crew figures to use as commanders. The other two are in slightly wierd poses, but not insanely so.
Painting all this lot felt rather like a chore at first, mainly because of all the camo jackets, which are tedious at best. I used the same method as for my 1970s/80s British infantry in DPM, sand base, red/brown stripes then go over the lot with green stripes to get the tone right. While earlier Denison smocks were distinctly tan in tone, the later ones were quite greenish overall and that was the effect I went for. After that they were just bog standard British infantry, which I've been painting since I was a kid, so things got easier. 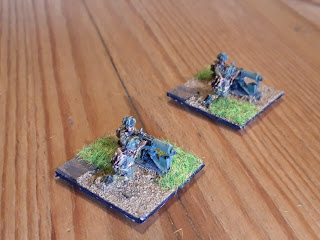 A pair of Vickers guns. The battalions were issued enough Vickers guns to convert either or both 3" mortar platoons into Vickers platoons on a mission defined basis. Most battalions plumped for one platoon of each, as they are useful for different things.
The Vickers crews are moulded in full infantry equipment, unlike their riflemen pals who were cast with quite a varied assortment, something which made getting a painting production line going hard too. At least they all had water bottles and entrenching tools, but some of them also had toggle ropes worn in a very unorthodox fashion (across the body instead of around the shoulders) and not a Bergen in sight.
I also plundered a couple of the Vickers crew figures (with binoculars) to use as command figures. 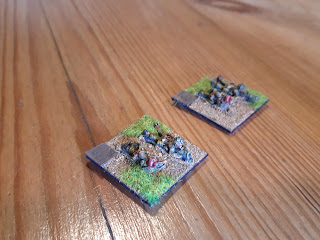 Prone PIAT teams. An interesting feature of the Para battalion support companies was an anti-tank platoon equipped not with 6pdr AT guns, but a whole platoon of PIATs (the glider boys got the AT guns).
I slightly trimmed one of the PIATs down so it could pretend to be a 2" mortar if needed. The loaders were nicely cast with a triple tube box of bombs. 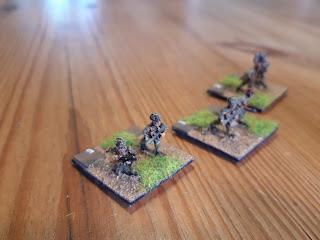 'Engineers'. I did these three stands with an eye towards Captain McKays Airborne Engineer Company at Arnhem bridge. They are bodged up from various other figures including kneeling Sten gunners, a pair of walking PIAT loaders carrying more ammo, and a couple of figures walking carrying PIATs, which might from a distance be mistaken for bits of engineer equipment or possible flamethrowers.
The figures all had nice deep cast lines which took an inkwash well, although I was careful to avoid getting any ink on the camo jackets as I'd managed to ruin the FJ jackets doing that. When the ink was dry I did a very light tan drybrush over the whole figure which worked its usual magic of emphasising the highlights. It worked particularly well on the helmet scrim, and saved me having to pick out the scrum strips by hand. I just did a few in dark green as a contrast. 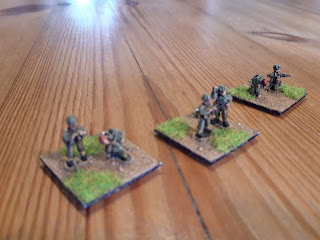 HQ stands. I've probably got too many of these, but you never know. For Megablitz type games I probably need three (1st AB Tac HQ, Staff and a seperate HQ for the Independant Polish Brigade).
The figures are mix from the command set plus other figures I'd plundered from the support weapon stands as I'd mixed some of the other figures into the rifle company command stands. 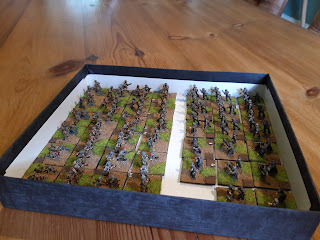 I put them in the same box as the FJ, so now I have a single box of 15mm WW2 paras. There is room for one more stand, so I shall have to think what that might be. Some supply cannister perhaps.
People with long memories may recall that this box was the same one I used to store all the figures, dice, cards etc for the old WD participation game 'Ten Rounds Rapid'. It that guise it held a BEF infantry battalion and an entire 1914 German Infantry Regiment. Not bad for an old computer game box, which dates from when computer games came on floppy disks. I think this one used to hold the excellent 'M1 Tank Platoon' by Microprose.