Simon found this interesting little game whilst browsing the internet. Quatre Bras on a 6x8, just the thing for a remote game. The Tims took on Boney, whilst Jerry and I were Ney. Simon and John ran the game and manipulated the map. 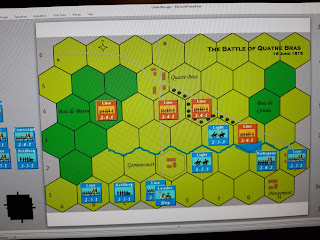 I forgot to take any pictures of the setup, but for the first couple of turns the French straggle on and try to duff up the Dutch-Belgians. We'd managed to push them back to the sunken road by now. The units were roughly brigade sized and I guess each hex was around 500 yards.
Each side used command points to activate units (typically 1CP to do anything, including moving, attacking etc). The French were on 1D6+1, which rendered a certain slow motion aspect to the whole thing. Units were rated for combat dice (1-3), morale (4-6) and movement (1-3). Combat was very simple, roll your combat dice vs the enemy morale value, each success being a hit. Units could take two hits, but fresh units could opt to take the first hit as a retreat. There were a few modifiers to this, and the whole thing worked very well. 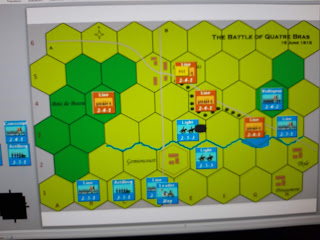 There weren't ZOC in the game, but plenty of constricting terrain, which is already causing the outnumbered Dutch lots of problems as we push around their flanks.\. Cavalry could make a charge move under certain circumstances, which got various, but left them disrupted afterwards (the big black marker above). Charges were particularly effective against units already disrupted by artillery fire, which encouraged a degree of combined arms operations. 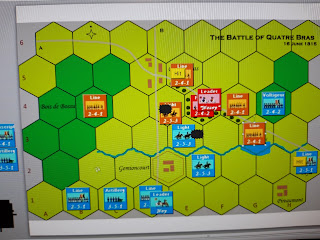 Oooer, Allied reinforcements have shown up, including Nosey and the Rifle Brigade. Life got a lot harder at this point as Wellington got lots of command points. 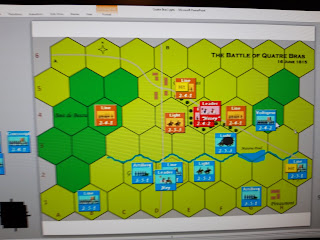 A ding dong battle around the sunken rod breaks out. Our Voltigeurs are over the woods, and very effective they are there too (there morale is rated as 6 in a wood, so very hard to dislodge). 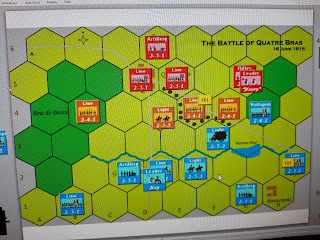 Hordes of British infantry roll up. These chaps are rather better than their Dutch pals. The extra units mean the British can plug the gaps in their line. The French haven't really made enough progress,  but I'm a bit stumped as to what else we could have done. We can either use our CPs to attack or move stuff up, with an average of 4.5 CP per turn, we can't really do both, so much of the large French force sits idle. The Allies meanwhile can just use their average of 5.5 CP to blast away with every unit in range. 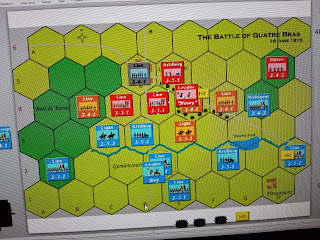 The British form a line in front of Quatre Bras, while we try and expand our bridgehead over the stream. 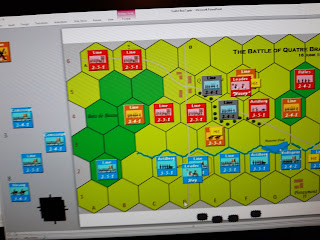 That didn't go very well as our leading units are either forced back or obliterated in a wall of Allied firepower. Our survivors are outnumbered 2:1 at this point. 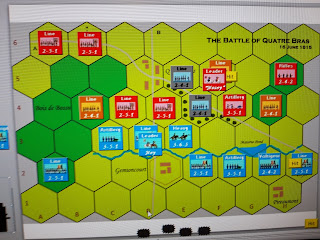 Time to push on again. Ney personally leads a mixed force of infantry, artillery and Kellermans cavalry over the stream. 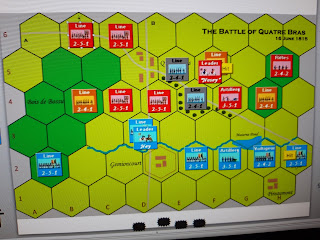 Once again the terrible Allied musketry roars out and Ney is left looking rather lonely. Even Kellermans elite cuirassiers vanish from the field, and with that we call it a day. I honestly couldn't see what to do differently which would affect the outcome.
The game mechanisms actually worked quite well, and I liked the interplay of infantry, cavalry and artillery, although we struggled a bit with the cavalry charge rules which had certain elements of Barkerese about them.
A later reading of the original rules revealed that units which win a combat can advance into the vacated  hex. Ah, we'd missed that, and in fact it would have helped considerably with the initial French advance (as the Dutch kept retreating from adverse combat results, then just marching back into the same place again). Armed with that knowledge, a French success looked slightly more feasible and the  group set about playing the scenario again having swapped sides the next day. I didn't play in that one as I had a prior social engagement (first trip to the cinema in well over a year).