As I didn't want my British paras to feel left out, I bought some Heroics and Ros 1/300th Horsa gliders to go with the Zvezda Dakotas. 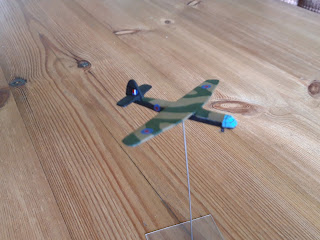 Here is a Horsa lumbering along. This is a much more substantial aircraft than the Dfs 230 gliders and the weight rather made the steel flight stand wobble. I'm glad I didn;t go with 1/144th as these are big planes. 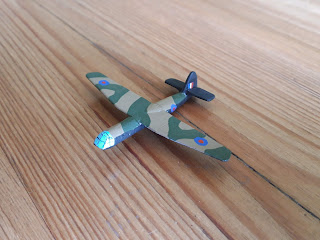 This is quite a simple model with a fuselage, wing and single piece undercart. The fuselage is a large piece of metal though, and the wings are also quite thick. It went together well enough though, and like the Dfs 230s, didn't have much flash. 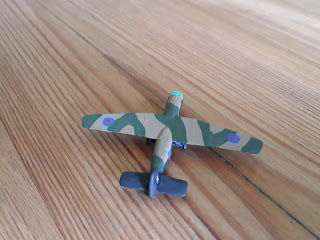 I had a look at various colour schemes and this one seemed quite common in Europe, a black night scheme on the undersides and tail, with disruptive earth brown and green on the wings and upper fuselage. I didn't dare attempt invasion stripes, perhaps I'll add those one day.
I did the canopy in sky blue and picked out the canopy frame with a micron lining pen. I painted the roundels and tail flashes on, which required something of a steady hand. 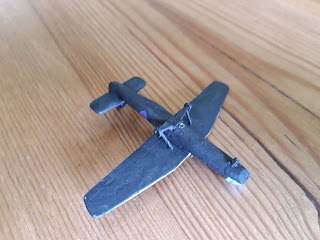 The underside was just plain black. The undercart looks a bit spindly but is surprisingly sturdy. 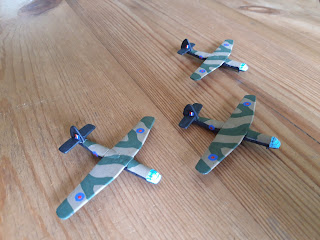 I got three of them, which should be more than sufficient to scatter across the table as required.
I was really pleased with how they came out. Now I just need to come up with a scenario to use them in. Fortunately I have a couple in mind...