The weather forecast for today was dreadful, heavy rain and thunderstorms, but in fact it dawned with just a bit of light drizzle so I went for a run into Irchester and back. I don't know what particular sacrifice to the weather gods had been made, but it was very effective. The weather just got better as the day progressed, which was good for the amount of time we were spending outdoors.

After a vast breakfast, it was off to the first game of the day.

This was Ian Drurys game of counter insurgency in late 1950s Algeria. I always like Ians games and often end up playing the myself or adapting them for other periods. Briefly, it is aimed at company to battalion level operations with units representing platoons or heavy weapons teams. 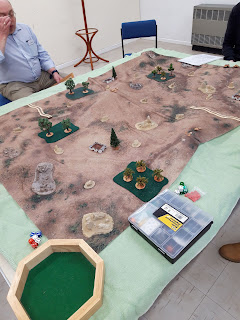 The tabletop represented a large area, 24 Square kilometres, as operations were very, very dispersed in this theatre. The play area was divided into a 1km grid to regulate movement and combat, and many areas contained a 'critical point' (village, mountain top). Units expended movement points to move and enter/leave critical points, conduct searches etc. 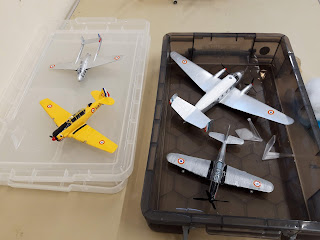 The French had lavish 1/72 air assets. 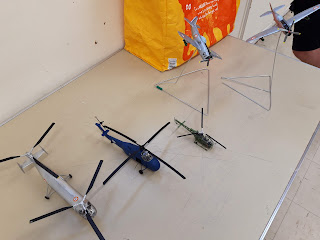 Including these lovely helicopters. The French P47s are courtesy of Tim. 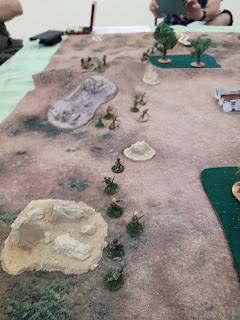 The FFL came on in an extended line. Four platoons on a 4km front. Ouch! Each figure represents 5 men (so 30 man platoons). The FLN manouvre hidden, using pins on a cork board until contact is made. Me, David and Mike were the FLN, our mission being to exfiltrate our force off the far side of the table. A bit tricky with the whole French army in the way. 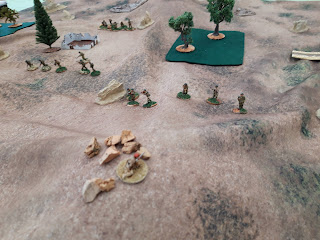 The French stumbled onto our sniper on this mountain, sadly he was asleep at his post and taken by surprise. 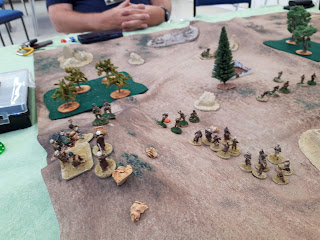 Over on the other flank, we managed to get a fine force superiority. The vast amounts of small arms fire mainly produces pins rather than casualties. It turned out that the French both shot better and rallied better than we did, so the French platoon ahead more than held its own as our column ran into it. As the zones are so big, all combat is internal to them, with only some heavy weapons able to conduct ranged fire.
Despite the target rich environment,  frantic calls for French air support went unanswered and the French shifted some troops across. This in turn opened up a hole in their line and we broke contact and piled our entire force (concealed) through the gap while the French mopped up our rearguard platoon. It was at this point I realised we moved faster then the French.
Having wrapped up so quickly, we ran another mission. This time the FLN were defending, and set up a series of ambush positions close to the French entry point. This worked really well, and we managed to utterly pin down two French platoons, and even inflicted some losses and captured a pair of MGs with a charge. Ambush fire was pretty deadly. 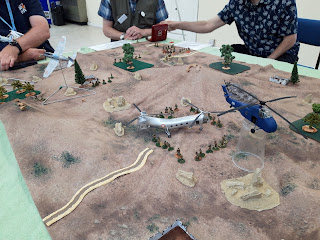 The French responded by landing an entire company by helicopter behind us, which was really very impressive. Time for the FLN to pack up and head for home.

What a great game, I really enjoyed that and I'm looking forward to it being published in The Nugget. The game itself is fun, and the mechanisms are applicable to lots of other periods too.

A Battle of Monsters

Tim and Nick put on a game covering Villiers Brettoneux in 1918, which absolutely wasn't an excuse to play with 1/32nd scale tanks on the lawn at all. The game covered a big Allied infantry attack supported by ten tanks, but the Germans in turn had half a dozen A7Vs to support their defence. 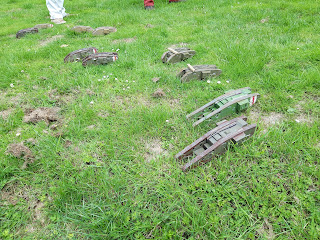 Some of the assembled monsters. I'm glad the rain held off as it was so much more fun to play outside. The opposing trench lines were marked out with compost. 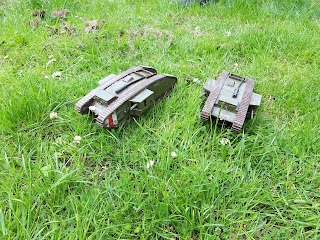 A pair of Mark IVs. We had seven British players so divided the tanks up between us. For some unaccountable reason, I was designated as CO. 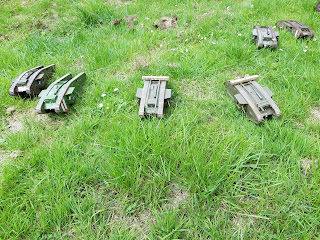 Moving up to the start line. The attack was preceded by a bombardment which included smoke and gas. I'm sure that won't cause any issues. 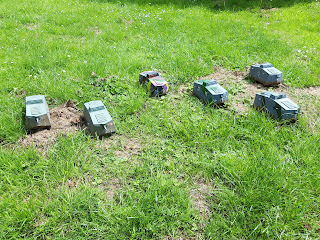 The wicked Germans moved out of their assembly area as the shelling ended. 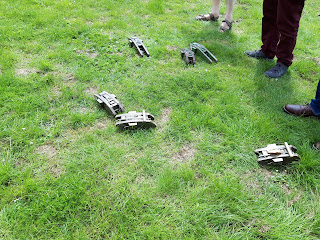 Sadly, the smoke did cause a degree of confusion, and tanks careered in all directions in the murk, with a few near misses. The Germans were also lobbing shells at us , and I seemed be a complete shell magnet, being stunned not once but twice by near misses. No vehicles were disabled however. 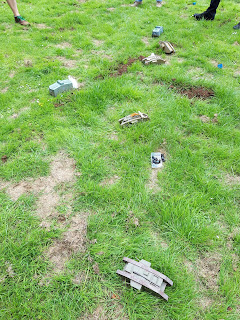 Once we got in close, our numbers began to tell and we despatched two German tanks here for the loss of three of our own. One tumbled into the German AT ditch. The AT system involved firing matchsticks at pictures of tanks, with suitably unpredictable results, but very entertaining for the players. 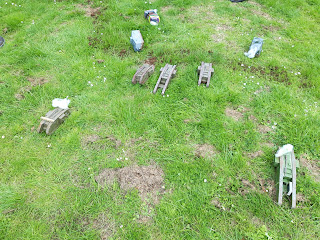 And over here another two Germans went up in smoke for the loss of two of ours, and with that, the Germans decided it was time to pack up and withdrew.
A very pleasant way to spend a sunny afternoon.

For Whom the Dice Rolls

I was keen to observe Graham's new Spanish Civil War rules in action. I've been following their development on his blog, but it isn't the same as seeing them played. I dropped in after the WW1 tank game to watch for a while. 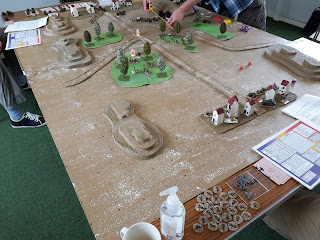 He was running the Guadalajara scenario which has been featured on his blog, with the Littorio motorised division attacking one of the International Brigades. The Italians are fully motorised and supported by armour, but handicapped by a lack of air support and muddy ground off road. 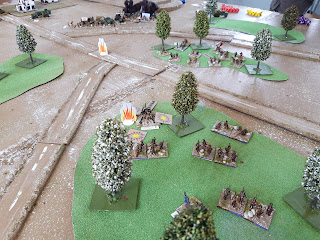 At this point the Italians have debussed having encountered the first Republican positions and are busy lobbing artillery and mortars at each other. 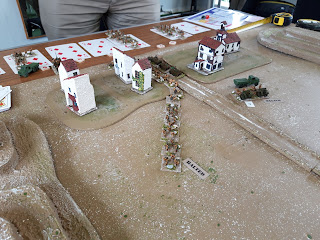 Further back, two more battalions are marching on, while the Italian tank column trundles up the road. I stayed for about an hour, which gave a very useful grounding in all the game mechanisms including unit activation, morale, direct and indirect fire, air strikes and close assault. This was very useful and gave me a good feel for how the game worked and how it played, and I later had a lengthy discussion with Graham about the design and operation of the command system.

A game in the best possible taste covering everyone's favourite Red Army Faction terrorists in the 1970s. This was essentially Cleudo, but instead of accusing Colonel Mustard in the conservatory, we chased our anarchist pals around 1970s West Germany as they attempted to expose the Third Reich fascist continuity at the heart of the Bundesrepublik. 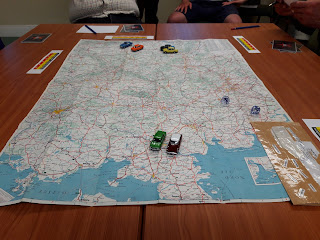 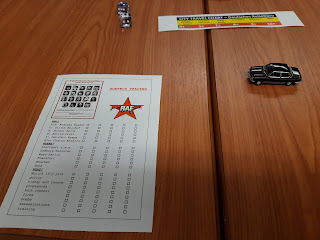 The Cleudo score sheet. Instead of moving around zones, there was a movement chart which required particular dice rolls to move to certain cities, some being harder than others.
It had been a long day and we all seemed to have forgotten how to play Cleudo, so it went on a bit  longer than it might have. At a meta level it was a brilliant simulation of the the futility of the struggle, but it was also an interesting trawl around that most peculiar event of homegrown terrorism in a liberal democracy struggling with the ghosts of the past.
The game ended with a short film about the RAF, concluding with the sombre reflection from one of the older and now wiser activists that all their actions had done was expose the capacity for fascism in everyone.  A thought provoking end to the day, especially after the moral compromises we'd had to make in the plenary game the night before.