Having got my Fallschirmjagers a Ju 52 to jump out of, I thought they also needed some gliders, otherwise how is poor Major Witzig going to land his engineers on top of Eban Emael?

Given how little use these were going to get, I didn't waste any time looking for 1/144th scale ones and just went for 1/300th. 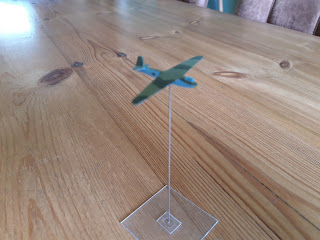 A Heroics and Ros 1/300th scale Dfs 230. What a lovely little model, the legacy of the pre war Luftwaffe glider clubs is very obvious in the design, although this was a fair bit bigger than the two seater versions, even mounting an MG behind the cockpit. Did the Germans mount an MG on everything? 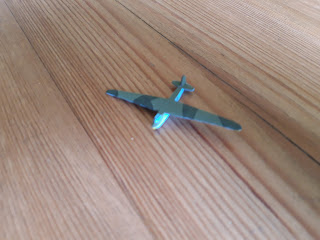 Being 1/300 th scale metal, it only had two parts - the fuselage and a seperate single piece wing. It hardly had any flash and the wing section fitted perfectly. As usual, once sticking it together I undercoated it grey.
At first I thought these were far too small to look any good, but I was mislead by the size of the fuselage as the wings are enormous. I can't imagine how big a 1/144  scale one would be. 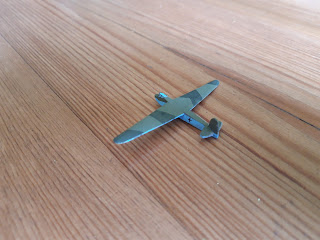 These little planes were generally fairly plain, with just small crosses on the sides of fuselage and under the wings. They were often just plain green on the upper sides, but I found some photos of some with a basic splinter camouflage on the wings so I did that to make them a bit more interesting. They also sometimes had some disruptive patterns on the sides but that was a bit hard in 1/300th so I just left them plain sky blue. 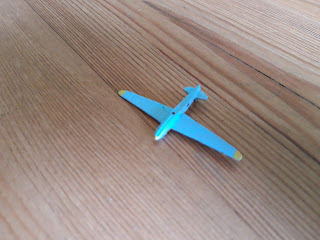 I left the undersides quite plain, no point in highlighting the landing skid. I drilled a hole in the centre of gravity for a flight stand. 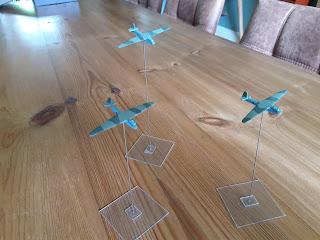 Here it has some friends, I am sure that will be plenty for whatever use I find for them.
That was fun, lovely little models and a joy to paint.