I seem to have settled on 6mm for my WW2 western desert activities. I toyed with 15mm for some time (I even had a large 15mm desert armies in the late 90s), but 6mm seems to where I'm happy for this theatre.

One thing my desert forces have lacked for a very long time is any dedicated air support, instead they had to make do with aircraft pressed into service from cooler climes, and even on the odd occasion, cardboard counters. Oh the shame!

Anyway, a rummage through the aircraft box, plus a few purchases from H&R and a bit of painting soon put that to rights.

First up we have some of the RAF desert contingent. 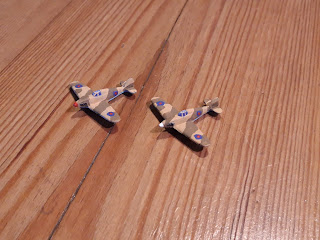 A pair of 1/300th scale H&R Hurricane IIs. I went for these as they were fairly common in the desert and can also double up as tank busters if needs be as well as providing some top cover. Nice simple models with very kittle flash, and unlike their 1/144th scale pals, no assembly required. Always a bonus. 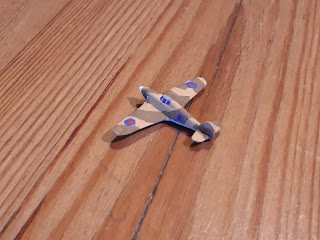 I spent a fair bit of time peering at photos trying to work out the right pattern for the colour scheme. Then it came to me in a blinding flash of realisation, this is just the temperate green/brown scheme but with the green replaced with sand. That made it pretty easy to do.
I haven't got any RAF decals small enough, so like the Horsa gliders I did last year, I hand painted the roundels. They are a bit wobbly but good enough from a distance. Planes without any markings at all look too plain imho. 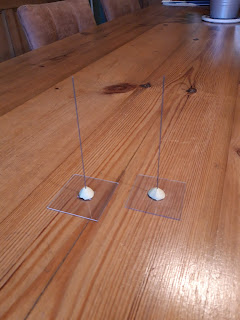 As I was doing some more aircraft, I also made some more flight stands and beefed up the existing ones. They are just piano wire stuck into clear plastic sheet, but with some of the heavier metal planes they are a bit bendy, so added a collar of milliput to give them some more heft and support the metal shaft. That seemed to work OK and even held up the 1/144th scale metal Mosquito which weighs a ton. 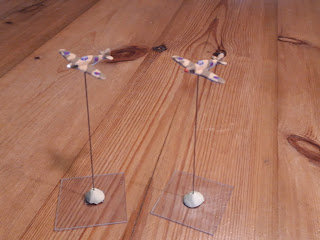 Here are the Hurricanes on patrol over the dining table on their new flight stands. I was very pleased with how they turned out, there is something rather smart about hard edged desert camo schemes.