Next up in my ACW campaign was Stones River in 1863, using the OHW 'Control the Bridge' as the scenario. Close enough. It could be done with Pitched Battle, but Stones River ran right through the middle of battlefield and so this looked a better candidate. 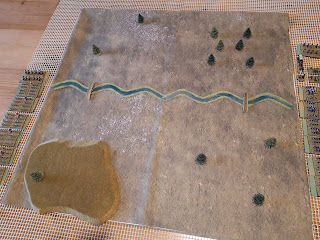 Battlefield set up as per the scenario. Hill bottom left, small wood top right, the rest is scatter terrain. The Union enters first from the north, CSA from the south. This gives the CSA a chance to respond to the USA deployment as historically the CSA attacked. 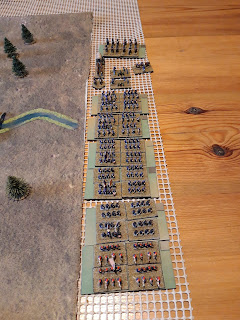 The US Army under Rosencrans. I used historical unit proportions, so they have a Cavalry unit, two guns and six infantry for nine units. I just allocated unit quality proportionately so they have one Veteran, three seasoned and two green infantry.
I'd made a few rule changes: artillery was beefed up so generally got two dice, cannister was now four dice. I also added Army Morale with each side starting to dice at 50% losses, and some Leader rules. There was a command distance, units more than 8" from the leader had to roll to move, and leaders could also influence morale tests and rally results at some risk in certain circumstances. Finally I reversed the order of morale tests for charging. Paddy Griffiths noted that the more experienced units became, the less likely they were to charge frontally in the ACW, so now Green troops charge on a 4+, Veterans on a 6. As close combat is so bloody in these rules, that seems sensible. 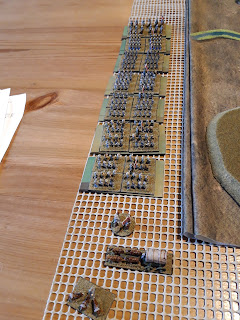 The CSA under Bragg. Strangely they ended up very like the Union, with two guns, a cavalry and six infantry (1 x V, 3 x S, 2 x G). I added one of my new wagons for flavour and there is also a dismounted cavalry stand for if the troopers get off their horses. 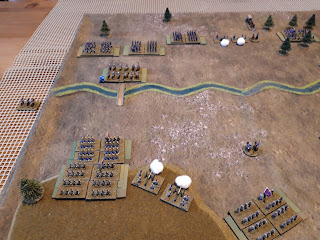 Over on the left the USA put three infantry in line abreast towards the bridge. Their guns unlimbered in the centre. The CSA responded with no less than three infantry (including their Veterans), their cavalry and both guns on the hill! This is actually a much better spot to fight and I made a big error with the USA deployment here. The CSA cavalry even made it over the bridge and got off their horses before the US could get there. 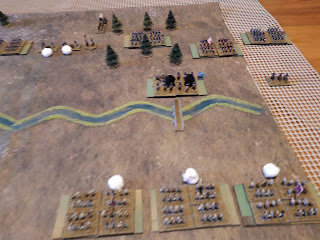 Over on the right the USA also made a cavalry dash for the bridge, supported by two infantry. Id somehow managed to deploy everything so there wasn't actually room for my sixth US infantry unit, not a brilliant piece of staff work. Well, it kept one in reserve which I'm sure will be handy. The CSA responded by simply marching up a line of three infantry to cover the bridge.
That d**n wood! It completely got in the way. I'd planned to put an infantry unit in it to cover the bridge, but it basically just slowed everything up as I had to manouvre through and around it. The US cavalry didn't get as far as the CSA as a result, and dismounted on the wrong side of the river. A withering volley of CSA rifle fire inflcited 50% losses on them in one turn. Ouch! 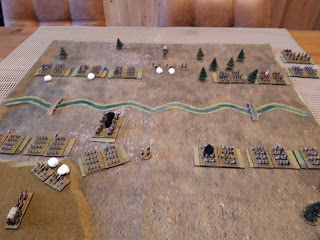 The US cavalry duly routed right into their supports and were destroyed. What a disaster. Over on the other flank the CSA cavalry were also battered by the US infantry, but being better quality, stayed so I mounted them and rode them out of harms way. Unfortunately they were also parked right in front of a great mass of their own infantry.... 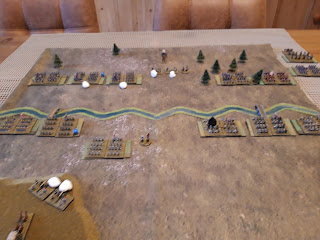 The USA duly shot them up again and the CSA cavalry disappeared. Now the entire CSA infantry line rolled forwards to the river supported by their artillery. Hilariously there still wasn't space to deploy the reserve US infantry unit. I'd left gaps, but none big enough to fit another unit. 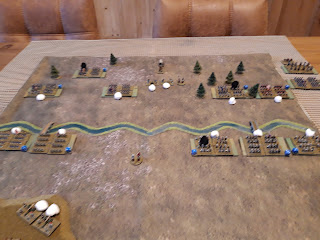 Now the grim attritional phase of infantry combat started. Both sides blazed away at each other. The CSA had more units in line, but the US had one unit in cover and slightly better artillery, As units lost bases the fire became more ragged and some units fell back. One of the victims of this was the CSA infantry in front of their artillery, they were forced to retreat into the guns and destroyed. That is a lesson for the future. 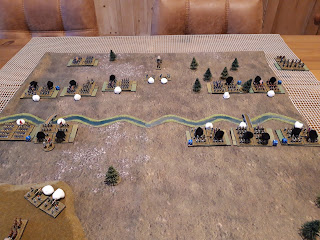 As the firefight intensified, both sides Generals positioned themselves to aid morale and rallying instead of optimising their positions for movement. The numbers engaged were  now equal, and the USA brought their reserve unit on. It stayed far enough back not to impede any retreats! 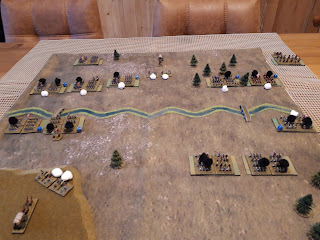 CSA units started to pull back with heavy losses (the black puffs indicate lost bases). This of course tipped the advantage ever further to the other side. 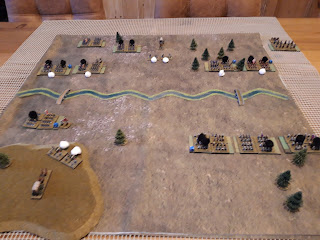 The seasoned CSA unit at the left hand bridge was overwhelmed with fire, just leaving the Veteran Zouaves and the General. On the right the CSA units had all fallen back and set about trying to rally. They still covered the bridge with fire from their position. One of the USA units had also fallen back. 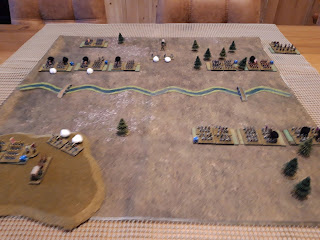 The Zouaves also fell back and a bit of a lull fell on the battlefield as both sides tried to rally hits off. The Generals were very helpful here. 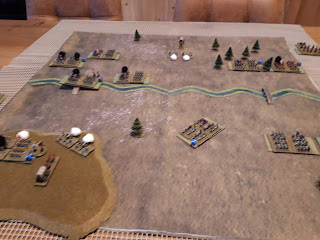 The USA felt a bit more confident now and a unit rushed the bridge on the left as the whole flank rolled forwards (again carefully leaving a gap for any retreats). The CSA infantry and guns opened up on them, but the accompanying US General helped them pass their morale test. One of the CSA units from the right moved across to help. 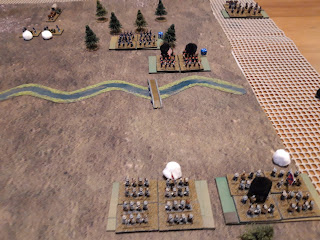 The US Zouaves approached the bridge on the right and ran into a hail of fire from the remaining CSA units. Being Veterans though, they held their ground. 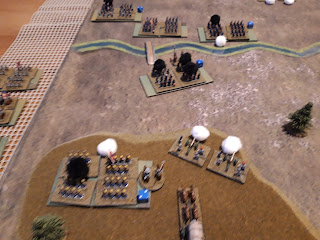 Meanwhile the US column pressed on over the left bridge, supported by the units on its flanks. They were now in cannister range of the CSA guns. Three bases lost! But the General kept them going. The intrepid infantry then charged the guns. I'd completely forgotten they needed a morale test to do this, but they rolled a 5 and overran the first artillery battalion. They had lost three bases and had three hits on the remaining one. I can see why ACW units were reluctant to charge...
The reserve infantry meanwhile followed their mates over the bridge. 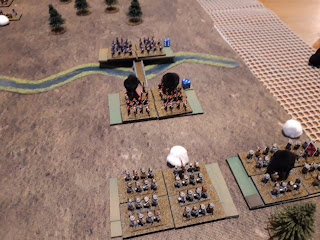 Over on the right the Zouaves also crossed the bridge in the face of rather scattered CSA fire. The Green infantry marched out of their wood in support. 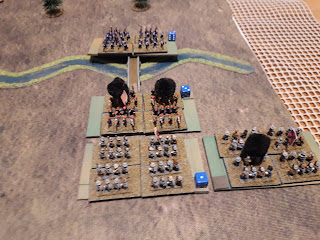 Now it was the CSA turn to charge. The infantry made their charge test and the Zouaves were hideously unlucky with their defensive fire. 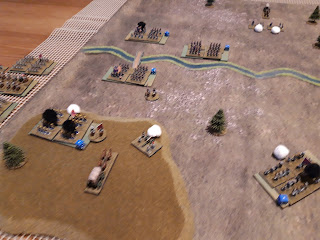 Over on the left the impetuous chargers were despatched by point blank cannon fire, but the US managed to push back the CS relief unit. More US units lined up to cross the bridge. 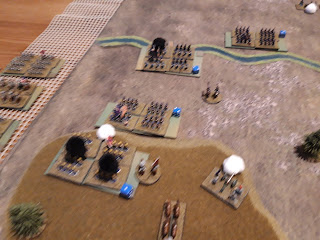 Over they went. This time they failed their charge test. Probably a good thing. Two US units were well over the river by now. 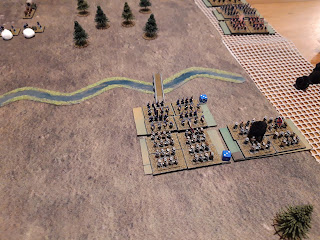 Over on the right, the Green US infantry charged the CSA. Green units pass their charge morale test more easily, and fortunately for them, the defensive fire was fairly ineffective. Three hits but not enough to lose a base. 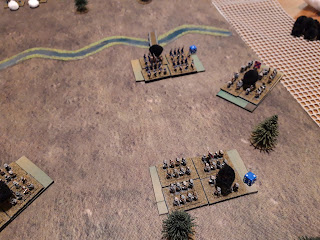 They also won the close combat and threw the CSA units back. I was a bit dubious about the very simplistic close combat system, but it does actually work quite well as a lot of the situational factors are already accounted for. Well done Neil Thomas, avoiding double counting again. 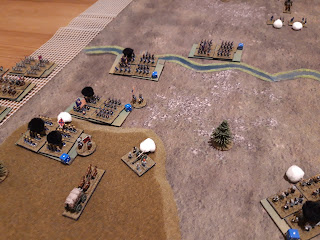 Over on the left both sides settled into a firefight again with the Union firmly in control of the bridge. 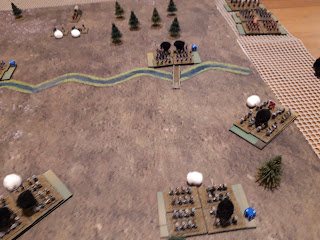 On the right the Green US troops fell back after taking some hits, but then CSA ran out of time to re-capture the bridge. So after a rather shaky start, it was an unexpected US victory.
That went really well and flowed along quite nicely. At one point I was worried it might just become a dull dice throwing contest, but it suddenly opened up again and there were some difficult tactical decisions to make.
It took almost two hours to play, so certainly slower than vanilla OHW, but not as tedious as some of the NT rules which have endless dice throwing and not much to show for it. The leaders worked really well although no units ever actually failed a move roll, it was always a bit tense when they were out of command range. Where they really came into their own was in rallying, and both commanders took big risks intervening in tactical battles. I'm amazed they both survived.
The only real problem was the space taken up by the units. How can half a dozen units with a 60mm frontage fill a 60cm wide table? I'm still baffled. I might try upping the table size, or play around with a grid and see  how I get on. Something for next time.