Russell had dug out a very old Jim Dunnigan SPI game from 1969, the Origins of WW1. I recall vaguely looking at AHGCs Origins of WW2 many decades ago, but as it didn't have a 'proper' map, or tanks etc, I wasn't particularly interested. 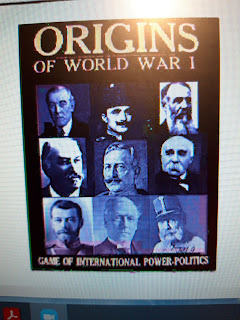 The game covers political machinations prior to the outbreak of WW1, and despite the picture on the box, it has three main protagonists: Britain, France, Russia, Germany and Austria Hungary. Essentially they deploy diplomatic resources around the world to achieve foreign policy objectives of their own (mainly to obtain treaties) and thwart the aims of everyone else. 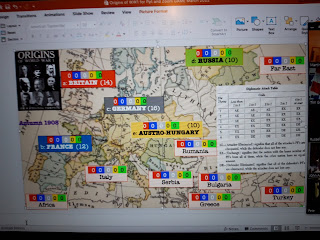 Russell had worked up the map into a Powerpoint presentation, with boxes to track the running totals of each countries diplomatic efforts in the various regions. This meant it worked brilliantly well for remote play, as it was really clear and easy to see what was going on - as opposed to looking at piles of counters on a map. Eagle eyed readers will see there is also a Combat Results Table, more on that later. 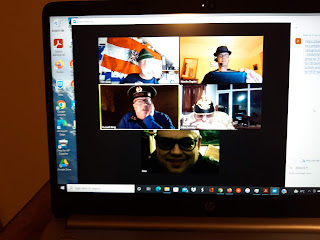 We assembled the optimum number of players, five. I was Britain, Tim Austria, Pete France, John Germany and Russell played Russia. Needing five players is also something a bit tricky for f2f gaming. As ever it was an excuse to assemble an outrageous variety of hats. 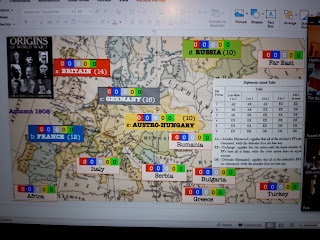 The opening moves. Each country has a certain number of diplomatic points they can deploy each turn (I had 14). If you had ten or more points in a country, you could claim treaty rights, which generated various victory points. You could also use your points to 'attack' one other countries diplomatic points in a region - to deny them the rights, which is where the CRT came in. The most common result was 'exchange' so if 11 points attacked 4 and get an Ex, the attacker was left with 7. The CRT was pretty brutal, even at 2:1 there was an AE possible on a 1. Odds below 1:1 were 50:50 AE or Ex, which made spoiling attacks useful. 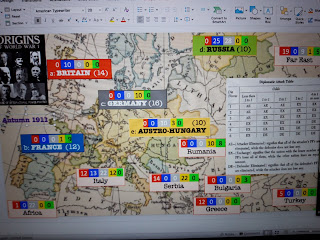 Here we are in 1911. You can see the various point totals in the country boxes eg France has a treaty with Britain, Italy is apparently allied with everyone! while there is something very odd going on in Serbia. The victory points are very, very asymmetrical - different for each country, some are dependant on denying other countries treaties (hence Britains interest in Serbia above) and cleverly designed. They reminded me of the points allocations in Mike Youngs decision games. The VPs combined with the CRT and limited points allocation made for fiendish decision making every turn, and as other players made their own decisions and attacks, the situation could change in an instant.
It worked really well indeed. And with only one page of rules! 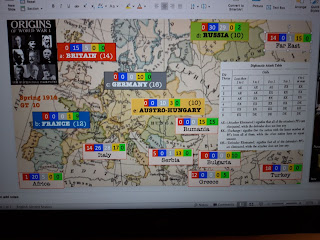 I won't bore you with a blow by blow account, but here we are in Spring 1914. I had the exciting task of maintaining the balance of power by preventing any single country getting more than 12 VPs (worth 10VP), stopping the French blocking Germany from getting any treaties (5VP) as well as some territorial objectives.
Italy was hilarious as lots of people piled in but without much in the way of diplomatic combat. There was a vicious three way struggle for influence in the Far East between Britain, Germany and Russia, while Russia and Britain almost came to blows over Turkey. At one point my 20DP had been reduced to 5DP by repeated attacks. France and Germany had a ding-dong over Africa, but Germany launched a very unfortunate 1:1 attack which rolled a 1 and wiped out the entire Germany diplomatic effort.
Stars of the game were Austria however, who quietly went around building up influence. Their big point winner was Serbia, they got 10VP for an exclusive treaty. Russia had a similar goal but showed very little interest as they had objectives available all around the globe. I was doing a great job in keeping the balance of power for many years, but I had to keep piling the points into Serbia as no-one else was. On the penultimate turn Austria attacked the British diplomats in Serbia and got an exchange, leaving them with just enough to clinch the exclusive treaty and no real possibility of anyone else taking them down.
Nicely played as that reversed my overall VP lead and gave Austria a huge bonus, and the Emperor won the game!
Highly recommended with excellent replay value. It is even available for free on the SPI rules scans website.