My recent foray into various ACW battles has revealed some shortcomings in my selection of river sections. I've actually got about 20 feet of river in various sizes and shapes, but playing on smaller tabletops for remote games has needed more of the short sections rather than the longer pieces.

The 1st Bull Run scenario essentially used up all my short river sections and there was one, and only one layout which actually worked and required a bit of creative thinking. They aren't hard to make and I had a spare afternoon, so time to make some terrain. 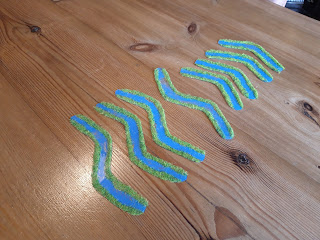 Eight more river sections to add to the collection. Those little one angle pieces are really, really useful for filling in gaps. 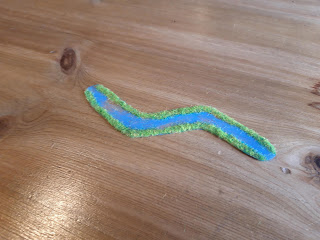 I already have quite a few of the two angle sections which go like this. 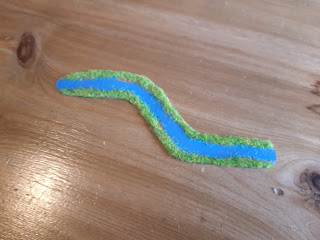 But not many which do this. Yes, they really are different and it can make doing some setups a real pain if you don't have enough of both. You can turn them over, but then the unflocked side shows. Urgh. 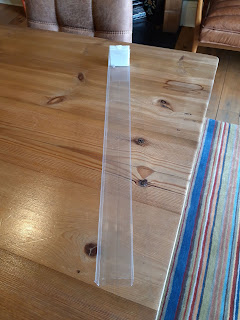 Anyway, I just chop them out of thin clear plastic sheet, such as this old roller blind container. The existing river sections act as a template and I just trace around them with a thin marker pen. 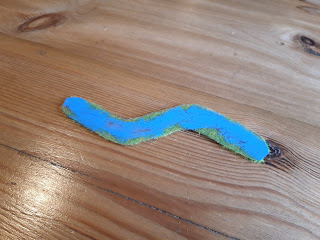 Go over the rear side lightly with some bluish paint, I use all the old emulsion match pots we have lying around from DIY projects. Ideally it needs to be streaky so some of the base terrain colour shows through the plastic sheet. I was a bit heavy handed with these as my original greenish-blue match had dried out, and the replacement was a bit runnier than I'd anticipated. I can always scrape a bit off. 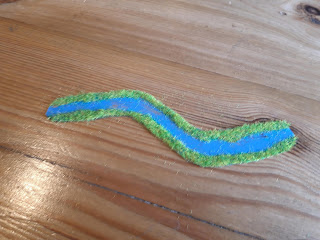 The edges of the top side is then daubed in undiluted PVA and flocked. I have a big bag of green Noch static grass which matches my Hexon tiles. When measuring the templates you need to allow for the 'banks'. For these smaller rivers I allow for each bank to be half the width of the watercourse (5mm each side, 10mm in the middle).
The ends are left rounded and clear of flock so a series of sections can overlap neatly. It also means you can have side branches which overlap the bank and don't have a wierd bit of grass in the middle of the river. Thank you to however first suggested that idea (I used to do river sections with square ends). 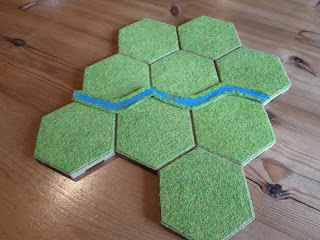 The angles of each section are carefully designed to align with the Hexon hexes. That took a certain amount of measuring and trial and error. For the original set of river sections I made up templates from thin card until I was happy with the size and shape, then used the card templates to trace out the sections on the plastic. 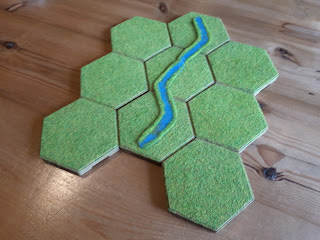 Obviously you can use them as normal river pieces across the hexes (or a base cloth or whatever).
I really like these river sections, they work for all sorts of things and are very easy to store and use. Bizarrely, they even work as wadis in desert terrain, despite having green banks. Some sort of trick of the eye (and some of the desert colour shows through).
Great, job done, plenty more river sections now. Time spent on terrain, like reconnaissance,  is rarely wasted.