Quadwrangles and the rise of Don Corleone

Ian brought along a game he's been working on to cover multi faction conflict in a variety of settings. The basic system is called Quadwrangles, and is a fine abstract game in its own right, but it really came to life when applied to a historical context. 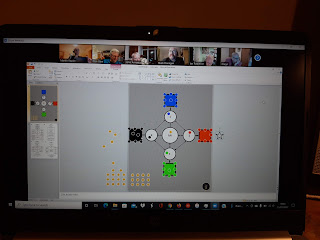 The basic concept is very simple. Each faction/colour has a base area, the bases are connected by five movement areas. Your counters can move one area at a time or shoot one area or melee counters in the same area. There are limits to how many counters can leave the base per turn, and also little gold markers appear which can be swapped for reinforcements if you have sole possession at the start of the turn. If you manage to occupy an enemy base you get five reinforcements, the winner is the player at the end with the most counters. Sounds simple doesn't it? 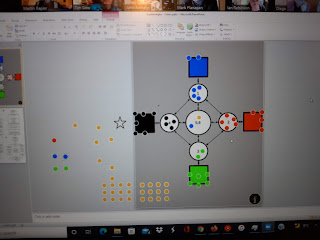 Here we are after a few turns. Red, blue and green have taken some losses, most of the players still have quite a lot of stuff in their bases apart from blue. There has been a bit of a bloodbath over the central zone. One element which makes a degree of forethought necessary is that the player who moves first each turn changes, indicated by the big star marker. This allows cunning manipulation of the turn sequence. 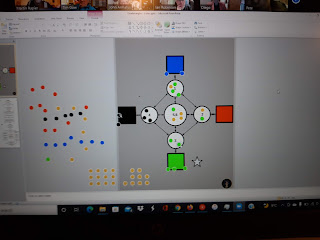 Getting close the end now. Green has captured Reds base and is swarming all over the board. Blue only has two counters left while Black has five but both are essentially pinned down by Green. There is a great pile of reinforcement tokens which Green has got locked down too.
I'd actually read the rules beforehand, unlike my Co conspiratirs, so you can probably guess who was playing Green. Ahem. The game ends when only one player is left or the playing cards (used to generate reinforcements) run out. From the situation above it only took me a few turns to finish off the other two players.
While it is a very simple system, there is an awful lot to think about each turn, and every decision is critical and related to achieving the objectives, not mucking about with mechanisms. The interplay of conflicting player choices, coupled with appearances of the critical gold tokens, made for a very interesting and challenging player experience.
The system is obviously designed to model multi faction conflict, so the next evening we took it to a real world example. 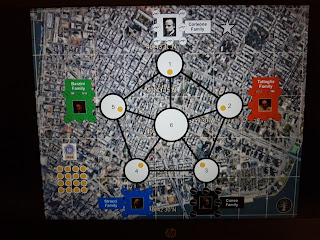 Welcome to Manhattens Lower East Side in the 1920s. The Five Families are going to battle it out to control the lucrative liquor trade. Corleone was white, Tattaglia was Red, Barzini was Green, Stracci was Blue and finally Cuneo was Black (played by me).
We each had a gold chip outside our bases and the only additional rule concerned NYPD raids which would sweep down from time to time and disrupt our nefarious plans. 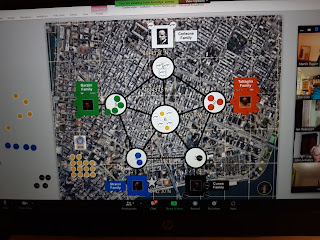 Everyone was fairly aggressive at first, apart from Tattaglia who hunkered down in his base. For some unaccountable reason Sacci and Tattaglia kept gunning down my guys as we emerged into the street, which rather limited my ability to get any reinforcements. Meanwhile Corleone was spreading his sinister white hordes across the map. 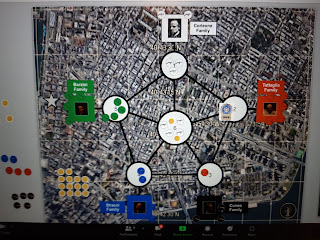 After several turns of pounding I was stuck in my base, penned in by Tattaglia goons, however both Sacci and Tattaglia had also taken a bit of a beating. Barzini was content to sit outside his base sniping at anyone nearby but not taking much offensive action. Corleone put in a big attack on Tattaglia, manipulating the turn sequence, but the attack was broken up by a police raid! (You can just see the police badge outside the Red base). 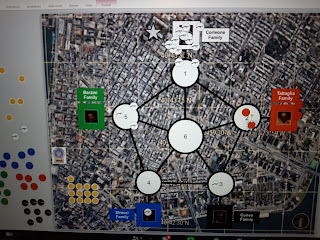 Having been driven off from Tattaglia's patch, Corleone instead took me out, followed by Sacci (you can see the white token in the blue base) while keeping Barzini penned in. 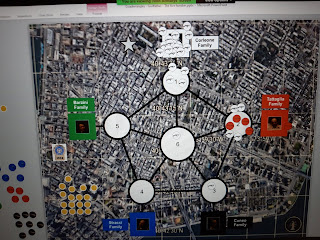 Tattaglia fought a brave rearguard action and put a bunch of wiseguys out in the street, but they were rushed by Corleone mobsters with Tommy Guns.  You can vaguely see quite how many white counters are jammed into the Corleone base! 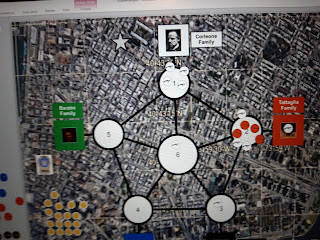 Despite Tattaglia's defiance, the Corleone gangsters shot their way into his base and the game was over. Time for us all to swear alliegence to Don Corleone.
That was really good fun, and putting into a historical context made it come alive. A very clever design with applicability across all sorts of situations. The Mexican Revolution was mentioned, as was modern day Iraq.