The Luftwaffe fighters needed some bigger friends to play with, and although I had plenty of Stukas in stock, I was a bit short of bigger 6mm German bombers. 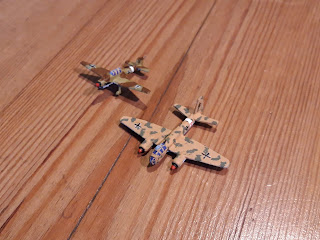 The Luftwaffe ended up with these two, both Junkers. A Ju 87 Stuka and a Ju 88. The Stuka was another old clunker I had in the aircraft box, while the Ju 88 is a new purchase. 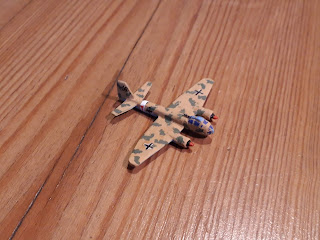 I like a Ju 88, a great all round plane which works as a level bomber, a dive bomber and even a heavy fighter. In this case however, I very cleverly made a mistake on the order and bought a Ju 188 instead. Doh! I've trimmed the wings back down to a Ju 88 configuration and had a go at the canopy, although that was hard to file into the right shape. I'm hoping paint has covered up the rest, although the engine cowlings are a bit narrower than a standard Ju 88. 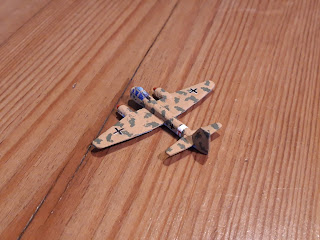 It hasn't come out too bad, although the paint scheme is actually one used on an He 111 squadron based in Sicily. I like the jazzy red/black spinners, and just a touch of green overspray. The large area of glazing is mainly dark blue with a bit of light blue highlight and the canopy struts show up nicely against the blue. It also got the ubiquitous white fuselage band, and as the fuselage is nice and thick, I even managed to paint a red recognition letter on it to add another splash of colour. 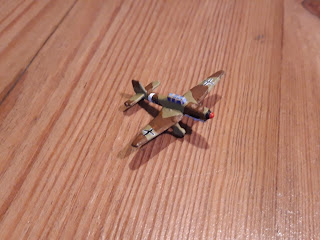 The Ju 87 cropped up in every theatre of war and is such an iconic German plane I had to have one for the desert. This was originally done in an Eastern Front scheme. Both the Ju 87 and Ju 88 suffered the indignity of my hand painted crosses, you'd think the bigger wings made them easier to paint, but no such luck. They don't look too bad from a couple of feet away I guess. 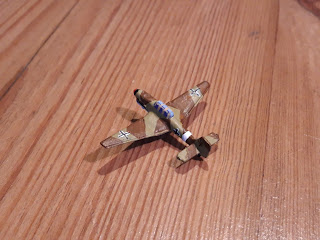 This unusual dark sand and chocolate brown splinter scheme is based on a Stuka squadron based in Libya in early 1942. I left the original sky blue underside but repainted the ground recognition bands from yellow to white (which seemed common in the desert), and also added the ubiquitous fuselage band. A bit of a coincidence was that this squadron also had the black/red spinners, the same as the Ju 88. 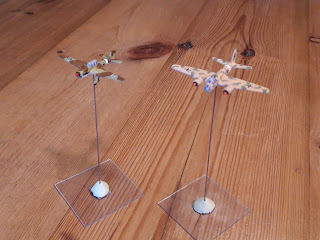 Off they go to bomb some targets over the the dining table. 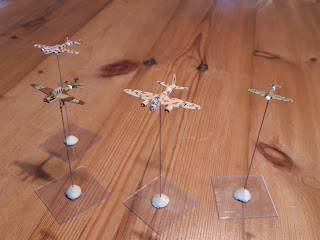 And here they are with their fighter escort. Seeing the planes together emphasises how large the Ju 87 was, it almost has the wingspan of the 110  (13.8m versus 16m). It also shows how small the Bf 109 was (9.9m wingspan).
I'm really pleased with that lot, so hopefully I've got enough planes for both tactical air support in brigade/regiment games and some representative aircraft for operational games.