Off we went to the War of the Spanish Succession this week, as Tim put on another battle from the seemingly inexhaustible list of scenarios available for Table Battles. Malplaquet was an exceedingly hard fought engagement, as Villars attempted to raise the siege of Mons. Eugene and Marlborough had to work really hard to fend the French off and casualties were hideous.

Russell and I were Villars and Boufflers, and John and Simon were Marlborough and Eugene. For the first session Simon was unwell so John ran the Allies alone. 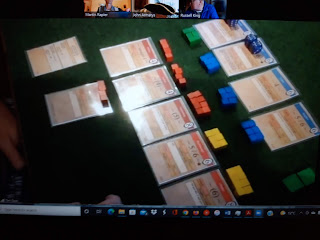 Well, it is a card game so not amazing amounts of eye candy! Each 'unit' is a card, the blocks show their remaining strength points. For the Allies, Schulenburg and Orange have a whopping 8SP, the French are going to have their work cut out.
Overall there are 30 Allied SP vs 24 French, but the outcome is more determined by how each side manages their card options.  Each card is restricted as to what it can do, which enemy units it can affect, and how effectively, which reflect the historical shape of the battlefield. This was one of the more complex setups as each side had two Wings, reserves and some different command options. 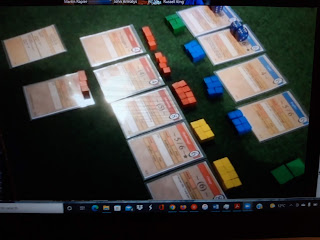 The Allies are seriously handicapped by having so many units which can only take one command dice per turn, whereas all the French units can take multiple dice (of the same type), so they can build up some serious attacks.
Having said that, the Allies seemed pretty tough too and while we battered away at them, Marlborough led a series of attacks on Boufflers which seriously attrited our strength. We were fortunate in rolling enough doubles to keep feeding in our reserves, but they were soon depleted. 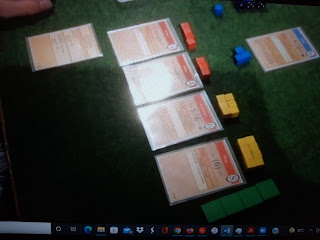 After several turns of hard pounding there weren't many French units left! In fact, just Villars was active, our reserves were exhausted and Boufflers and the Centre had routed. One of the British units had withdrawn with heavy losses and we'd routed Schulenberg, and Orkney was now committed. We kept pounding away at Orkney, as it was one of the weaker units. The final push was Villars with 1SP remaining (!), which succeeded in routing Orkney, and as Marlborough and Orange weren't in a position to attack Villars, the Allied line was broken and it was a French victory. Blimey, that was a close run thing.
On Wednesday we ran it again with the sides reversed, and Simon and Pete were also able to play. Russell and I took the Allies, with John, Pete and Simon as the French 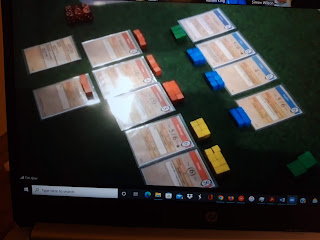 Off we go at full strength. Having played it once we all had much more idea what we were doing. We'd missed the special rule that Villars could allocate command dice to multiple units on his wing (normally it is only one unit per wing) so tonight we'd play it 'properly'. 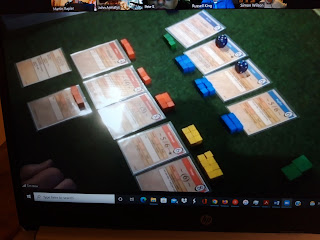 The initial flow of events was much like Tuesday. The French battered away at the Allied centre, while using their reserves to absorb Marlborough and Schulenbergs attacks. We managed to get Withers into action, who was able to directly attack the French reserves, reducing their ability to mask our attacks. 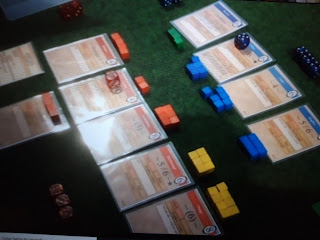 tbh things could be going better. Our Centre is very weak now, while we've hardly damaged the French front line at all. The French kept rolling '4's, which their Centre needed as command dice, and there wasn't much we could do about that. 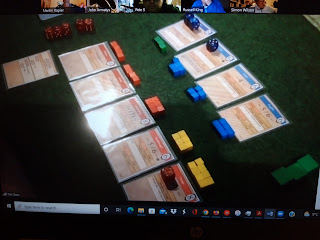 Ooops. Our Centre has routed and Orkney moved up from reserve. We have managed to batter the French centre and Villars somewhat though. Unfortunately losing the Centre gives the French an extra morale chit, without that, routing Villars would rout the whole French army. 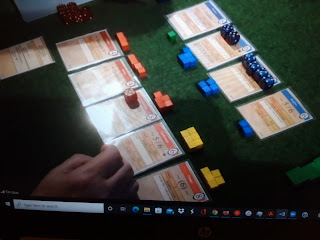 Our right wing gets into action, as Orange batters Boufflers down to 2SP, and another attack by Withers has reduced the French reserves to 1SP. Unfortunately the French have built up a huge 4 dice attack from their Centre again, which spells curtains for Orkney. 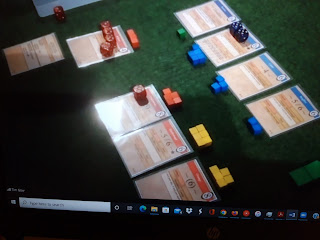 The French duly overrun Orkney, getting the French another morale chit. Only Schulenberg can attack Villars now, but still has 5SP. 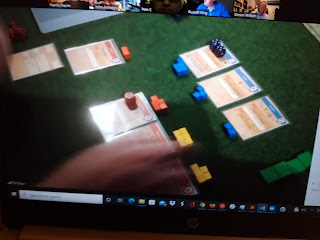 Withers returns the favour and destroys the French reserve, getting us the chit back. It is now a race to roll up the rest of the French army before they can destroy Schulenberg. 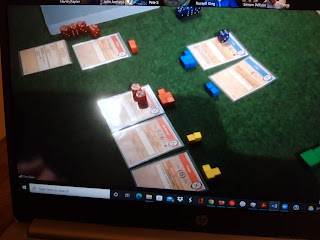 Boufflers routs under attack by Orange and Marlborough. Another chit to us. 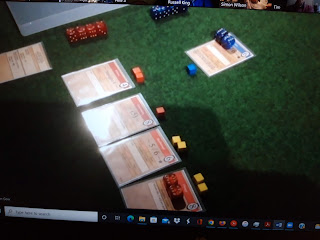 Then the French Centre goes, and another chit to us. Villars is now down to 1SP, we are nearly there. Sadly Schulenberg is also down to 1SP, but if we can manage and Exchange, he gains 1 morale chit for Schulenberg while we'd get 2 chits for routing Villars and a win.
Sadly it is not to be, as the French force us to react to their own attack, preventing our attack on Villars, and then Villars gets a double 6. Bugger. 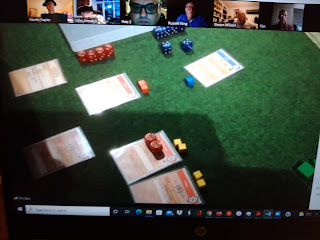 Villars duly blows Schulenberg away, gaining the victory just as in the last game with the French down to 1SP.
That was another really close game, and victory was actually within our grasp on three occasions, but good French play of the command dice blocked us.
Table Battles is a really clever system, and always produces impressive results. I can't get my head around how you design anything beyond even the simplest scenarios though, given the very, very complex interactions between the card characteristics. It just makes my head hurt, so I'm very glad the designer has provided us with such a great set of scenarios.