The RAF and Reggia Aeronautica had some nice new aircraft, so I'm sure Rommel wanted the Luftwaffe to have some too. The Afrika Korps has generally had to take lerate aur support in temperate colours, but I thought I'd do some desert ones. I have quite a few 6mm German aircraft models already, most of which are very old indeed. I had a bit of a rummage in the plane box and came up with these two old warhorses. 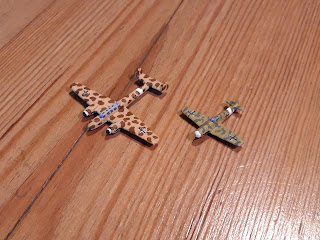 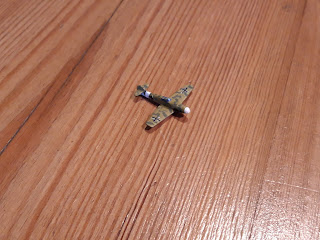 The Bf 109 is minute, but then again it was a small plane in real life, although I do have a suspicion there may have been a bit of scale creep in the intervening years. The original model was done in green/dark green splinter and I repainted it in dark sand with a bit of green overspray - another scheme from 'Axis Aircraft of WW2'. In retrospect light sand may have been more representative, but hey ho. 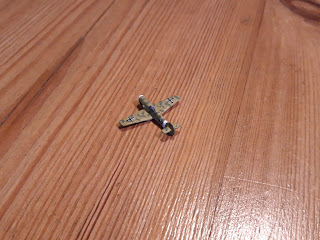 The balkan crosses are done by hand - initially a white cross, then a black cross leaving a bit of white showing. My hand isn't as steady as it used to be for doing this sort of thing, so they are slightly wobbly. I squared off the ends with a bit more sand paint. The white fuselage band seems very common on Axis aircraft in the desert, I assume it was some sort of recognition thing. It breaks up the camo a bit anyway, as does the white spinner. 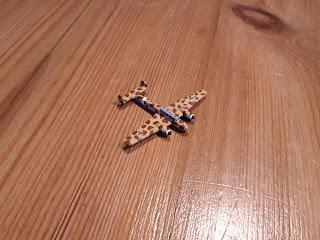 An Me 110 Zerstorer. This is also an ancient old model, and very handily can double up as a fighter bomber for ground attack. The camo is one of the special ones developed for North Africa, and with its red brown tightly grouped blobs reminds of the camo used on British tanks stationed in Malta. 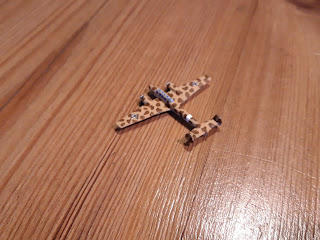 This also got the fuselage stripe and slightly wobbly balkan crosses. The spinners are based on a real plane, white at the base with black tips. It looks rather smart I think. I did have a go at painting some fuselage letters, but it was too small for my big fat fingers. 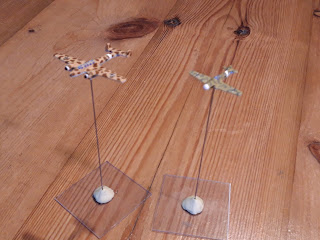 Off they go across the dining table a cruisin' for a bruisin'.
Next up, some German bombers.
Posted by Martin Rapier at 00:04