Mark laid on a game of Waterloo using a simple solo board game published by Worthington which to my eye was reminiscent of Waterloo 1815. Although it it designed to be played solo, in fact we managed to fit in five players (four French and one British). 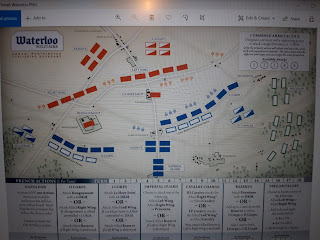 Here is the general idea, each major French unit can do a limited range of things to opposing allied units. There are special options for things like bombardments and incentives to take Hougoment and La Haye Sainte. The Allied response is (semi) randomised and ranges from the Prussians turning up to troops taking cover behind the ridge, forming square to repel cavalry attacks etc or even counterattacking if the option is available. Once the Prussians have built up, their attacks are particularly devastating. 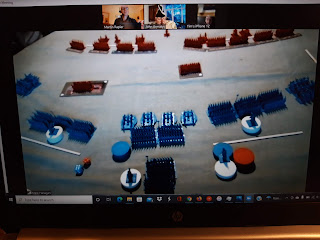 Playing it on a map is all well and good, but we much prefer toys. Mark pulled out his spray painted Warlord Epic Napoleonic figures (red for British, Blue for French and sinister Black for Prussian) and set them up on a tabletop.
The French have four infantry Corps (Reille, D'Erlon, Lobau and the Guard) plus massed artillery and a couple of Cavalry Corps. Only Reille, D'Erlon and the Guard are directly player controlled, the rest operate in a supporting role. Lobau can be used as a reserve to beef up the other Corps or try and hold off the Prussians.
Each major formation has a limited number of activations (the white counters) although Napoleon can also give units activations as he has his own pile of chips. Napoleon can alos coordinate a limited number of combined arms attacks (the red chips) which get a favourable dice modifier but require two formations which did not conduct such and attack last turn. Otherwise one block is used for each strength point of the various formations (typically 4-6). 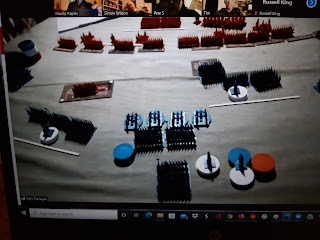 I missed the first play through, but for the second Tim C was Reille, I was D'Erlon, Simon was the Guard and Pete was Napoleon while John rolled Wellingtons dice. We opened with an unsuccessful attack on Hougoment, this has quite a lot chance (33%) of succeeding but the French pulled it off the preceding evening and proceeded to obliterate the Allied right and win.
Having bounced here, D'Erlon then assaulted La Haye Sainte (combined arms attacks aren't allowed against the strongpoints). This attack succeeded with some loss to the French, but capturing the farm removed the negative modifier for attacks against the allied left. 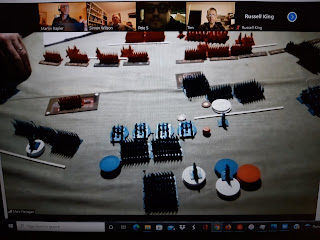 We followed up this success with a combined arms attack against the Allied left wing with D'Erlons Corps supported by the Grand Battery (both are marked with little counters). This was very successful and knocked 2SP off the Allies. Meanwhile some Prussians can be seen arriving in the top right. Once they were strong enough they would attack the French right, so making the French main effort here is something of a gamble. 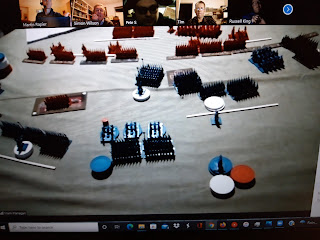 D'Erlon and the guns were temporarily exhausted, so we launched another combined arms attack using the Young Guard supported by IVth Cavalry Corps. 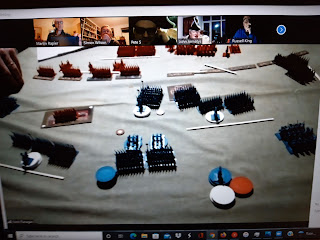 This was stunningly successful and the Allied left wing routed. Poor old Picton. Unfortunately for us, behind the first line was the Allied Reserve. 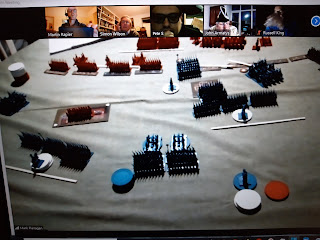 This was out of sight of the artillery as it was behind the ridge, so now we had to mount a series of attacks over the ridge without artillery support. These met with varying degrees of success and French losses mounted, while more and more Prussians turned up. 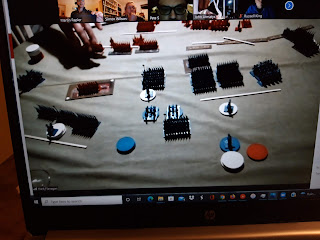 Lobau sent two division to shore up D'Erlon while we regrouped. This was a fortunate move as even more Prussians turned up and the reinforcements were just enough to discourage them from attacking. 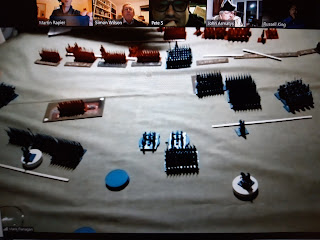 With our troops all rested, D'Erlon focussed on holding off the Prussians, while the Guard attacked the Allied Reserve supported by IV Cavalry in our last combined arms attack. 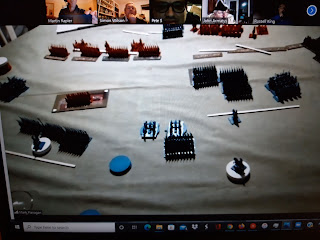 This finally succeeded in routing the Allied reserves and the day was ours! Off for tea in Brussels.
Well that all went very well, and seemed reasonable. The Allies were a bit unfortunate with some of their tactical responses (which reinforced their right, not their left, although there were zillions of Prussians on their left too). We rattled through the  whole thing in about 35 minutes, so plenty of time to set it up and do it again. 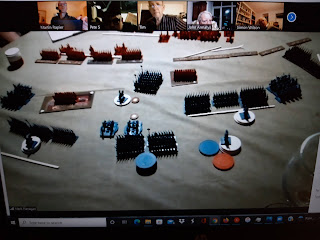 For the second run through, we mixed up the teams a bit. Tim C took over as Napoleon, Russell was D'Erlon, Simon took the Imperial Guard and Pete was Reille.
Once again the French attacked on the right, but this time the assault on La Haye Sainte failed and rather than waste more activations (re) assaulting it, the French just went ahead and attacked the Allied left, accepting the penalty for the Allies holding the farm. They tried to use Combined Arms attacks to make up the difference, which helped but made each assault quite chancy. 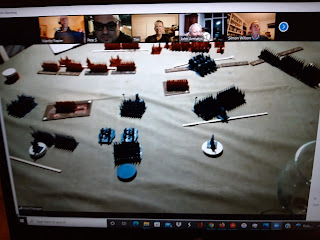 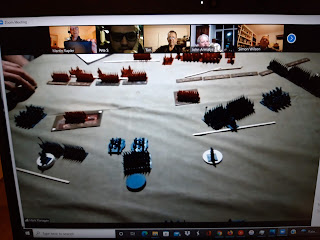 By now only Napoleon had any activation chits and a final assault by the Guard was bloodily repulsed (they were completely destroyed!). La Garde recule and all that. Dear me, things weren't looking to good. Napoleon only had one activation left, but Reille had some.
Reille assaulted Hougoment and was repulsed, losing two divisions in the process. Ouch. There didn't look to be much prospect of beating the Allied right. 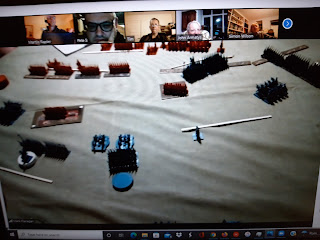 All that was left was a final throw of the dice as Napoleon used his last activation to push D'Erlon forward unsupported over the ridge. Despite the dubious prospects, Russell rolled some hot dice and at the very last moment managed to break the Allied Reserve and snatched a hard fought win. That was a very close run thing, and highlights the importance of taking one or other of Hougoment or La Haye Sainte early on, regardless of cost.
What a clever game, although with the advanced rules, the prospects of a French victory would diminish slightly.  Mark is planning on taking it to COW, and it will be interesting to see what the assembled Wargames Developments people make of it.