When my dad was in the RAF his main job was in the control tower, with a sideline in airfield defence (which he said was fun, but the Lee Enfield was a bit of a challenge to fire left handed). The only plane he ever actually went up in was an Anson, on some jaunt or other from the squadron. So, I've always had a bit of a soft spot for the Anson, and this model came my way courtesy of Mr Gow. 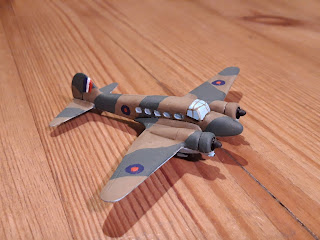 I've no idea who the manufacturer is, it was mixture of plastic and metal parts (the 'plastic' may have been resin, hard to tell), but it assembled into a nice model. It looks a bit cartoony, but I think that is the nature of the aircraft. This is one of the later models with circular windows, and lacking the dorsal turret, so transport/liaison. 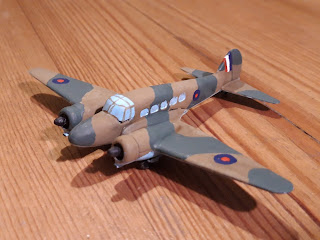 Tim had already built it so all I had to do was clean it up and paint it. I undercoated it light grey and had a dig around in my paint box. To my amazement my very old pot of Humbrol Dark Earth paint still had some life in it, as did my old pot of RAF Dark Green, so I could do it in proper 'Airfix' colours. I slightly messed up the canopy lines so this is a super rare Mark IIc with the special split canopy divider on the windshield.

I didn't have any RAF decals to hand so I hand painted the roundels and tail flash. I didn't dare attempt three or four colour roundels so I went with the no doubt inappropriate blue/red ones as I stood a fighting chance of painting those. 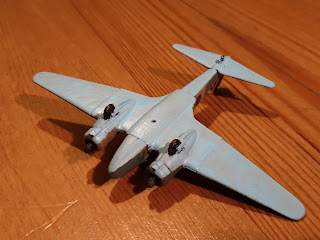 I just gave the underside a thin coat of light blue, which over the grey undercoat came out a pleasing blue/grey. I didn't bother with underwing decals but I did actually remember to paint the tailwheel this time (unlike those Dakotas - which I rectified at the same  time as doing this). 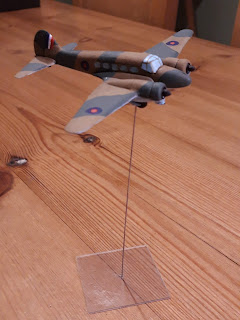 And off it goes over the dining table. I'm not quite sure what I'll do with it, but I expect I'll be able to cobble some sort of dubious scenario together to justify using it! I'm rather pleased with how it turned out, and I'm delighted that my old Humbrol paints still have a lease of life in them.