Regular readers will have noticed that I play a fair bit of WW1, and a key feature of WW1 is artillery, lots of it. Field guns are generally well catered for in the various scales, but I was after some heavier stuff and was drawn to the Irregular 'Really Useful Gun' range as they are a sort of intermediate OO/HO scale and will do for both 15mm and 20mm games. Good job, as those are two of the three scales I use for WW1. 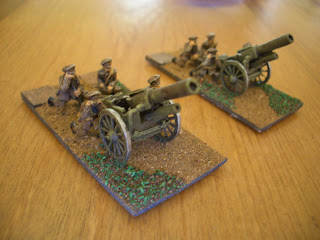 A pair of British 6" howitzers, these have more early war type spoked wheels. I have also used these as Russian howitzers. Irregular gun crews with these. 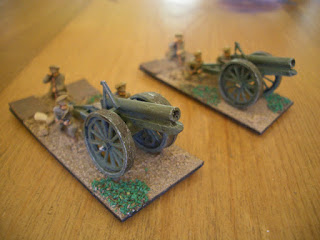 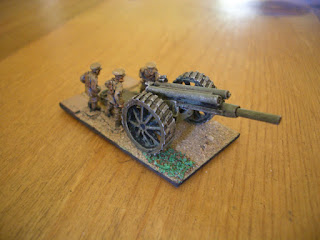 A lonely QRF 60pdr. This is a proper 15mm model but is such a beautiful casting I had to have one. 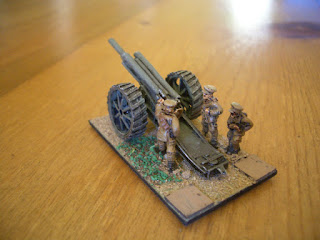 View from the rear. Those look like Peter Pig gunners. 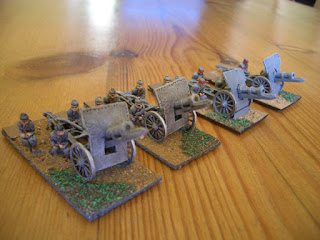 A collection of Irregular Krupp 150mm howitzers, I went for the short barrelled versions as they are good for the whole war. The shields were not pleasant to stick on, and are held in place with large amounts of blu tak and super glue. 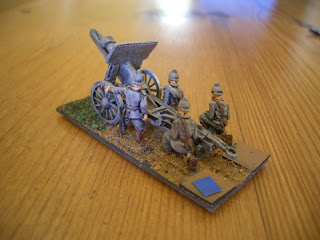 Some of the crews have picklehaubes. The gun shields are too wide ot fit the trench type wheels on without some filing down. 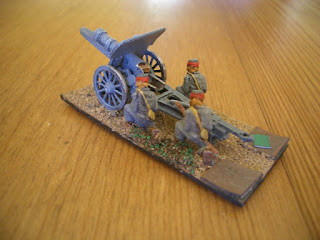 And some crew are in Feldmutze. You can specify crew types on purchase. 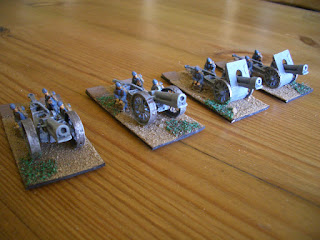 A similar collection of Schneider 155s. The shields would only fit the narrower wheels (same problem as the German 150s) 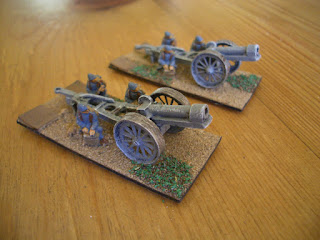 This pair have trench wheels. 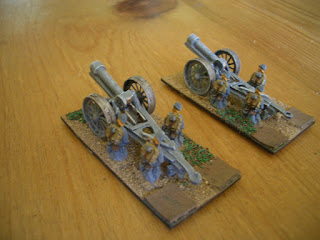 They are nice hefty pieces though. 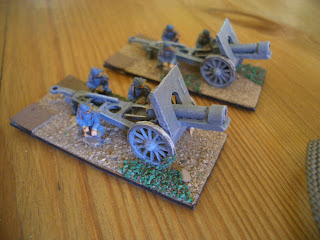 The Schneiders with shields. 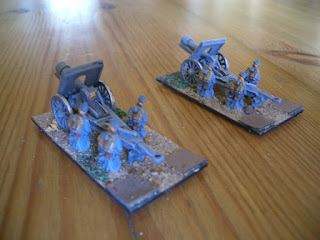 Crews in Horizon Bleu. The French didn't have much heavy artillery until later in the war, by which time the light blue uniforms where much more common. These guns have been pressed into service a couple of times for use as captured artillery pieces in German service (see the Periers Ridge and Day of Days game reports). The uniform colours aren't glaringly different under club lighting!

The Irregular models go together fairly well for metal artillery pices (give me plastic any day, but hey ho) and have the huge advantage of being cheap, come from a large and very flexible range with outstanding customer service. All these models have come out to play on a number of occasions, in fact rather more than I'd originally envisaged. It just goes to show that you can never have too much artillery.