I have a moderate collection of 15mm SCW figures which rarely sees the light of day, but it occurred to me last year that a lot of the figures would be eminently suitable as stand-ins for various WW2 combatants (Rumania, Bulgaria, the Netherlands, Italy etc). I re-worked a few of them to make them a bit more generic, and they are all basically wearing some sort of khaki uniform with helmets or sidecaps supported by various types of guns in varying shades of green so will do for a fair number of different countries.

To add to my collection of generic interwar/WW2 stuff I've been on the hunt for some extra guns in various calibres, and I was pleased to find a 47mm Skoda on the Bring and Buy at COW last year. 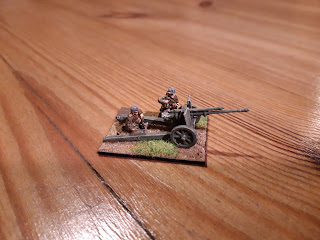 Having stuck the thing together, I realised it is probably a 20mm model rather than a 15mm one! Oh well, I cut down the trails and stuck on the gun shield and it will do as a French 47mm or similar. I do like the spoked wheels. 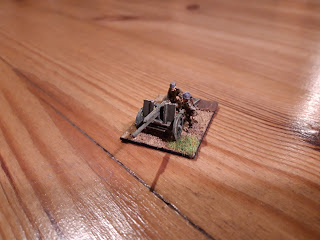 It could probably double up as an artillery piece, but I think it still looks fairly AT-gun like. I undercoated it black and just did it an overall mid-green with a light drybrush of tan to pick out the details. 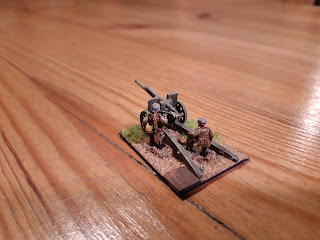 The crew are bodged up from the spares box. The standing figure is a Peter Pig WW1 French mortar crewman, and the loader is a PP WW1 German kneeling gunner with his picklehaube filed down. They are both done in a generic khaki with leather webbing and grey helmets.

It is a nice little model and I'm pleased with how it came out. I expect it will next e seen trying to fight off a horde of T34s on a snowy Russian steppe somewhere!