John was keen to try out his nice new 14th Army and Japanese figures, so he put on this game set in Burma in early 1945. It was taken from a training scenario on Jungle Warfare, and the idea was to try out the approved drill. The game was run using Blitzspiel using 15mm figures. The ground scale was around 6" to 100 yards, which funnily enough was also the maximum visibility in the dense forest. 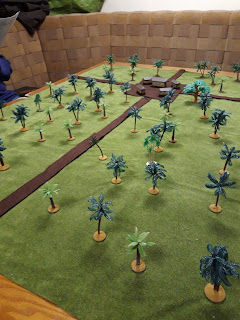 The battlefield from the British side. I contributed a few palm trees but they were mainly Johns. It looked pretty jungle-like I think. 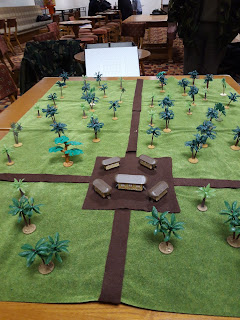 The British objective was this village, down at the far end of the track. 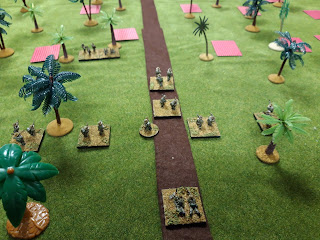 On came the leading platoon, ably led by Graham. The Japanese presence (or not) was indicated by inverted playing cards. The dense undergrowth made the going very slow, but lining up in a big column on the track just seemed to be asking for trouble

After a while some of the suspicious looking cards turned out to be real Japanese troops. 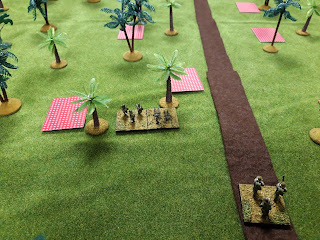 A section of the were lurking in the trees, covering the track. 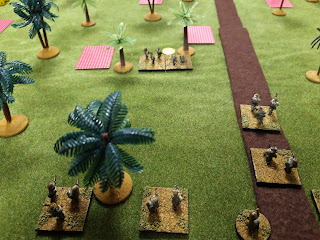 Their opening shots were ineffective and fairly soon the Brens had them pinned down. 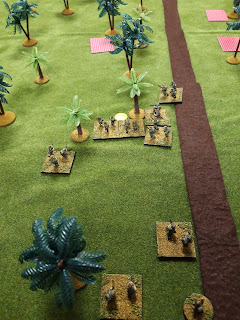 Then it was time for right flanking and clearing the position with bayonet and grenade, covered by the Brens. Just like the manual. 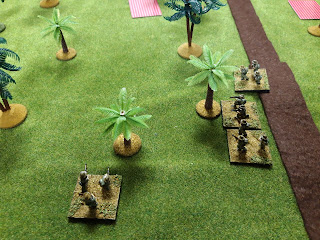 As the Japanese were pinned by fire, they were easily eliminated. 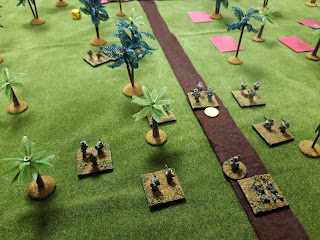 On up the track we went until another lot opened fire. They pinned the leading rifle group. 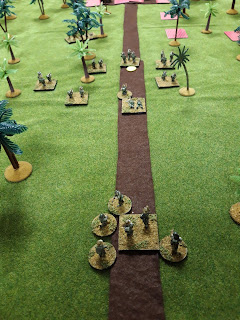 While all this excitement was going on, the Company command group came on, along with the MFC and other platoon commanders. Runners went back and forth but the Grahams chaps were doing fine. 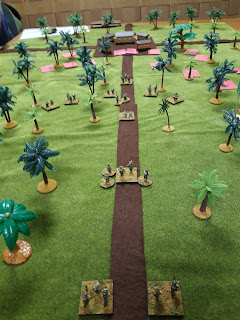 The lead platoon fanned out,  but the Japanese melted back into the jungle as the rest of the company began marching on. 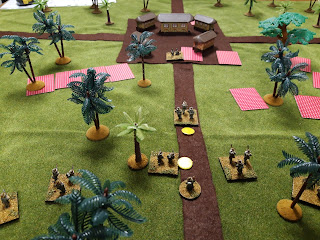 Things started getting a bit sticky when this nasty MG opened up down the road, pinning the leading section. 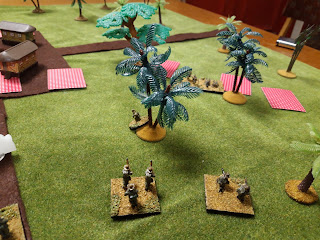 Then this sniper started shooting from behind a tree and another Japanese section opened fire. 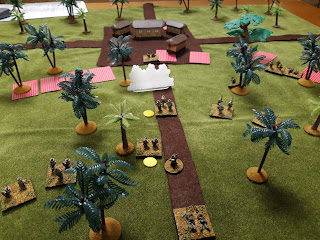 Time for a spot of smoke to cover the pinned troops on the road. 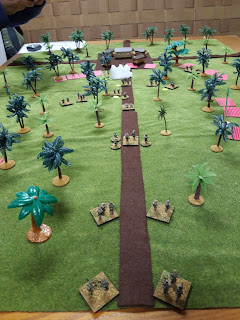 The leading platoon had another section pinned by the Japanese fire, at which point it was thoroughly bogged own and time to commit the rest of the company against what was obviously a strong position (it turned out there were two other Japanese sections as well).

At that point it was time to call it a day, we'd pushed a fair way up the track but time had run out. The attack never really developed into a company attack as the dense jungle precluded a rapid flanking manouvre. Instead it was a platoon fight and Graham managed to get a long way on his own. It was a shame we didn't manage to do the full company attack but perhaps we were a bit too tentative in our advance.