Along with the Skoda 47mm, I also picked up a couple of other guns from the COW Bring and Buy for my generic WW2 minor forces. These were a pair of unusual Russian 37mm infantry guns with spoked wheels from Irregulars Really Useful Gun range. The castings were very odd, with the barrels and gunshields cast on the wrong way around. The real guns do have a strange appearance as the wheels are mounted forwards of the shield under an extended barrel mount, but nothing like these. 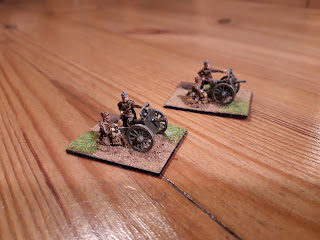 In the end I managed to make something passable by chopping the castings in half and reassembling them with a stub of barrel showing. I suspect the originals were cast with the shield forward, at the end of the gun barrel which may have been an option on the real one. The photos of the real thing all show the gun shields mounted well back though. 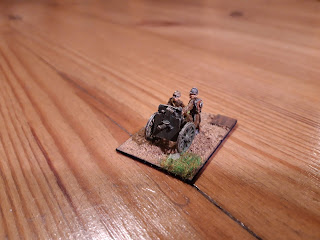 It doesn't look too bad at all, quite a cute little gun and a good standin for light mountain gun or similar. One of the guns was missing its axle but it was easy enough to make another one out of wire. 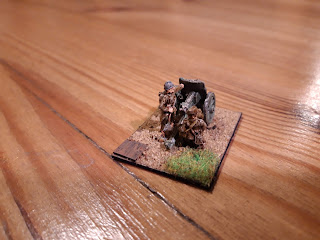 The crews were assembled from the spares box, a standing French officer in a greatcoat and Adrian helmet (possibly Essex?), a leftover from one of my other French WW1 howitzers and a kneeling figure  in a kepi with a basket. I filed the kepi down to make it look like a sidecap. 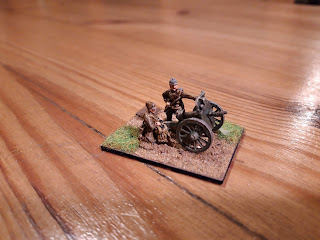 You can see the basket bit better here, I decided it has ammunition in it as clearly a little infantry gun would have its ammo carried in a woven basket. I suspect it is supposed to be a pigeon carrier! As with the Skoda, I did the crew in khaki, brown leather equipment and grey helmets and the gun overall green with  dusty drybrush. I picked out the wheel rims in gunmetal.

After an unpromising start, they turned out OK. I should have taken a photo of the original casting to show the difference, but I didn't. Someone wise once said you can never have too many lorries, and I am inclined to say the same thing about artillery pieces.

Expect to see them being wheeled up the Caucasus mountains by some unfortunate Rumanian mountain troops next.