After the fun of St Vith, it is back to the Bulge again, this time for a trip to Krinkelt and Rocherath at the northern end of the Bulge. Avid readers will no doubt recognise this setup from my earlier playtesting post. In the end I gave up with that set of rules, they were just to fiddly, and went with a rather reworked and beefed up version of One Hour Wargames (six hit variant) and incorporated some of the concepts around unit types and interactions I'd already developed. 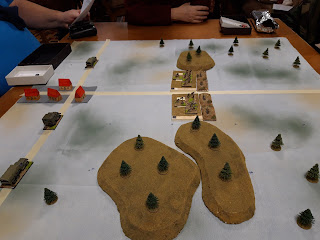 Battlefield from the south, Krinkelt is on the left, the Westwall on the right. 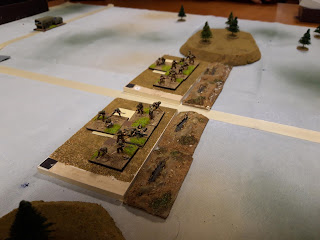 Two battalions of the 99th dug in covering the gap. These were both green infantry battalions, which reduced their endurance (5 hits). After much fiddling around with handfuls of bases, I ended up plonking them on some old movement trays I had (5"x3"). They are battalions after all and take up a fair bit of space. The big bases also solved some issues around measuring. 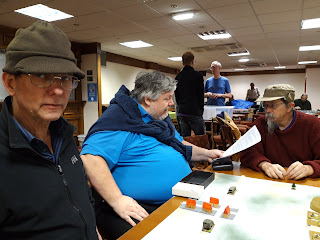 Tim, Graham and Jerry deep in thought planning their defence. It is amazing how much discussion six units can generate! In fact that is one of the things I really like about Neil Thomas's approach, the ruthless focus on key decisions. If you've only got six elements, every single one matters. 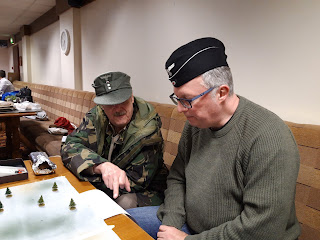 The wicked Germans (John and Tim) also pored over their briefings. 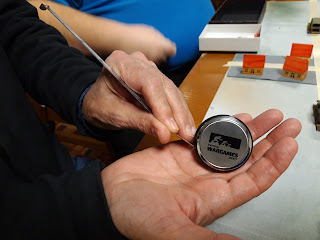 There was great excitement as we were issued with Sheffield Wargames Society anniversary tape measures. I am sure these will be highly collectable in future! 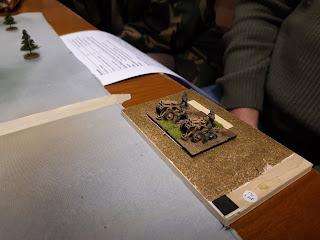 The German assault opening with a massive barrage form artillery and Nebelwerfers. The first combat outing of my Nebelwerfers in fact. 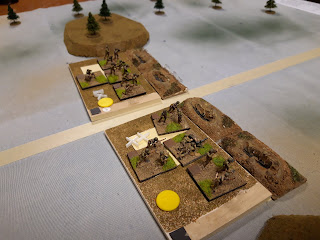 The barrage was surprisingly effective despite the US trenches. The US battalions each took a couple of hits and with only three hits left, became disorganised. Oooer. 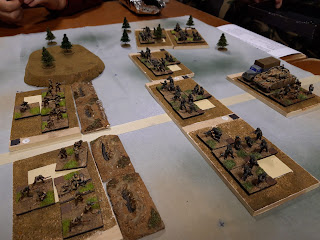 The Germans rolled on over the next few turns with Teutonic precision. Two regiments of Volksgreandiers, followed by the divisional Fusilier battalion and a kampfgruppe from 12th SS Panzer Division (historically this wasn't committed until after the first VG attacks had failed). Jerry focussed on rallying off the hits caused by the barrage, so for the first couple of turns, the US positions were quiet - effectively suppressed by the German barrage. 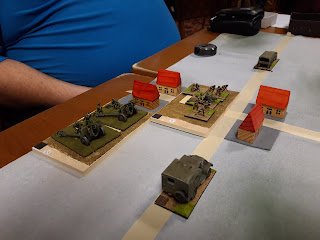 Back in Krinkelt, the first US reinforcements rolled up. A battalion of artillery and an infantry battalion reinforced with towed tank destroyers ('Heavy Infantry'). Graham commanded these. 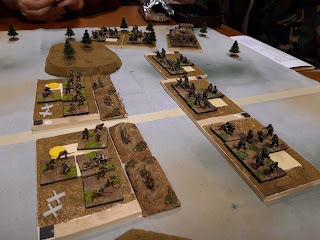 Back at the front, withering German fire from three VG battalions inflicted hits on the US, Jerry once more focussed on rallying them off rather than firing back at reduced effect. So those MP44s really do work. 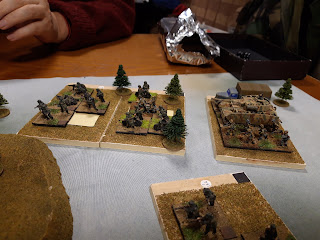 The rest of the Germans marched off around the right flank. Sadly the slowest troops were in front. The ground scale is roughly 6" to the mile, so these guys are fairly bunched up, but not unreasonably so for tactical movement. 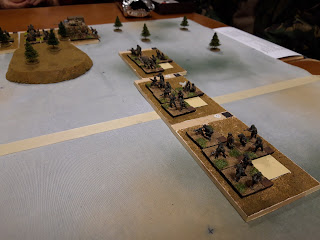 The US artillery inflicted a few hits on the VG but not enough to stop them and Jerry bugged out, abandoning their positions in the gap. When I'd playtested this scenario, the US usually fought to the death here. 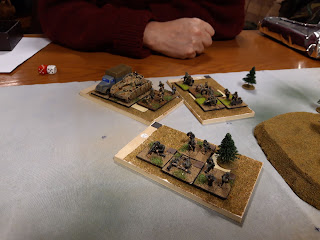 As the Germans rounded the bad ground, they sorted themselves out and the motorised SS battlegroup moved to the front. 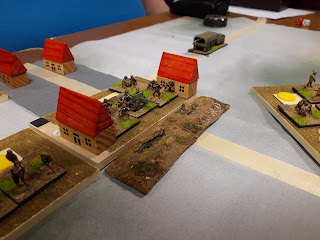 The US trooops in the town had meanwhile been busy digging in. One of Jerrys disordered battalions tried to rally. 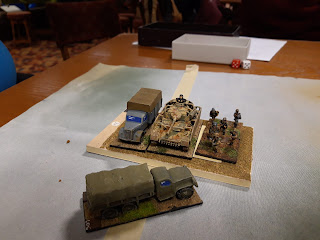 The SS meanwhile went on a wide flanking manouvre and were very excited to roll up the supply lines running north from Rocherath. Lots of Coca Cola and ice cream captured here! 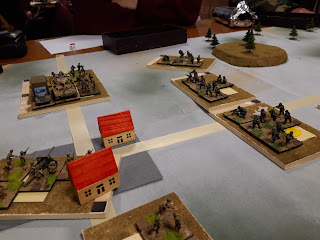 They then went on to overrun Jerrys disorered battalion outside the town, but sadly the camera didn't record that for posterity. The Germans closed in on the town and the US forces fell back from the outskirts, worried about their flanks. 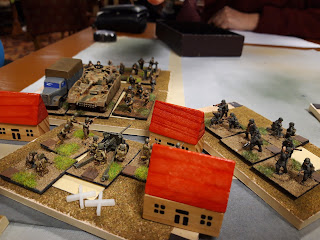 The Germans put a heavy assault in and street fighting erupted. 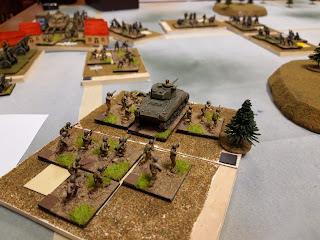 While all this was going on, more reinforcements from 2nd Div turned up. 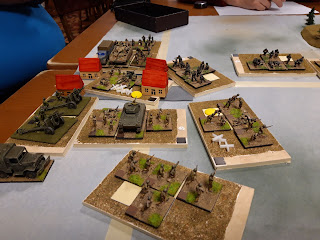 And piled up the road to support their pals in the town. The fighting there continued to rage (the units were now locked into close combat) and losses mounted. 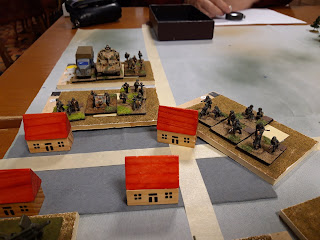 The SS withdrew to regroup (having superior mobility, they were able to disengage) and the Fusilier battalion piled in. This was enough to finally overwhelm the defenders and the crossroads were cleared. 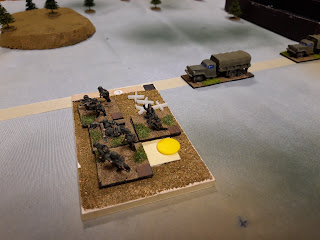 German losses were also heavy, these VG were pummelled by artillery out in the open. 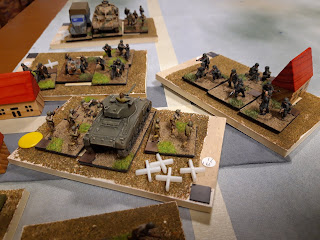 Before the Germans could occupy the village, US reserves forestalled them and moved into the town. I do like this aspect of the move sequence as there is actually some point in keeping reserves. 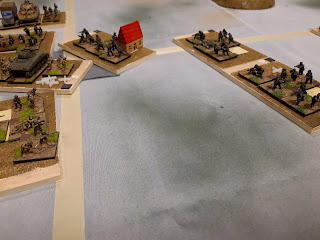 The US were starting to look a bit thin on the ground as the reorganised VG surged forward once more, they had quite a way to go to pin the last US reserves and the daylight was fading... 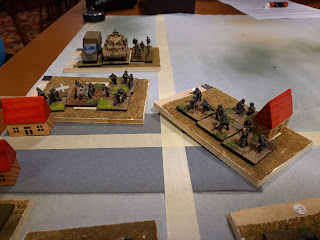 The US reserves in the town were overwhelmed once more. The SS were out of the fight now, but the route to Elsenborn was open! 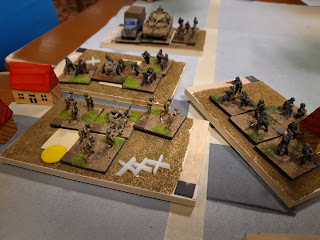 The very last US infantry unit slipped in among the buildings. Although the VG outside the town had chewed it up, they hadn't done enough to stop it and as night fell the crossroads were back in US hands (abeit rather tenuously).

That was sooo close, and the players all seemed to enjoy themselves. It also followed the historical action quite well as the US defences were outflanked on the right and the defenders found themselves all bunched up around the villages themselves. IRL the SS battlegroup wasn't committed until both VG regiment attacks had failed. This was the incident recounted in Charles MacDonalds 'Company Commander' when his company was overrun by German tanks and infantry northeast of Rocherath.

I think that went pretty well and the modifications seem to work alright, one of the players commented that he didn't even realise it was a One Hour Wargame. I've borrowed so much stuff from Megablitz, NQM and Spearhead that it is quite a different game.

We did have a bit of a discussion about the uses and limitations of artillery in a divisional level action as our professional gunner objected to some aspects of the artillery model. There are a couple of simple additions I can make to model the pinning and suppressive effects better, and it would also allow for counter battery and harrassing fire. I also need to tidy up the treatment of terrain as there was some confusion about  LOS and terrain effects. There was some discussion about march mode vs tactical, but given that the battlefield represented here is only a few miles square, I reckon the divisions are operating 'in contact'. There is a neat idea in Rommel I can borrow to tweak the terrain effects so I can model road columns through dense terrain (this mainly affects armour and artillery).

OK, next time we'll try it out with a proper tank battle, then I suspect that is my COW session sorted.