John had been doing some research recently and discovered that Baden-Powell of Scouting for Boys fame, was a strong advocate of the sport of pig-sticking as an aid to cavalry training and wrote one of the definitive guides to the sport (still available on Amazon).

Further research followed and a game was duly produced, including various specific figures courtesy of the vast range of figures from Irregular. John and I had already tried this out and made a few adjustments, but this was its first outing at the club.

The Knustonpore Tent Club was represented by myself, Tim G, Tim C and Jerry, while John adjudicated. 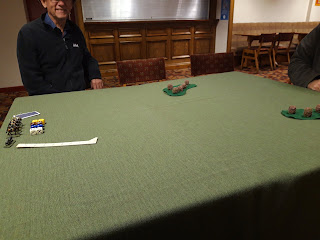 The country. Over to the left (off table) is a load of jungle and six foot high grass being swept by beaters to drive out the deadly wild pigs. Our bit is a grassy plain cut up with a few clumps of bad going. 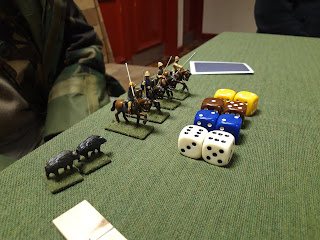 The Knustonpore Tent Club lined up for a heat.  A couple of Irregular hogs for size (a large male and a juvenile). Each rider is colour coded by uniform and assigned a pair of individual dice. A variety of spear styles was in evidence, mostly underarm but my chap in blue is overarm. Lunging is discouraged, throwing spears strongly frowned on and emptying ones Webley into an angry hog is an expulsion offence. 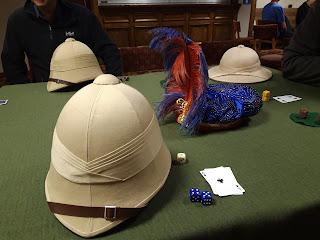 This was on occasion for our very grandest hats, a couple of pith helmets, Tims very grand Indochina vintage cork hat and Jerrys even more magnificent Nawob hat. 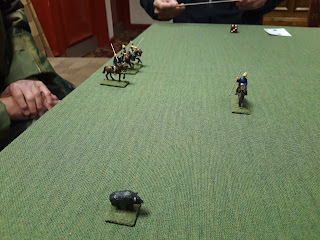 After a number of sows emerged (very unsporting to hunt the sows) the first proper hog appeared and off we went. Cards determined our activation order and I was lucky enough to be first out of the gate. Move distances are semi randomised, and it is adviseable to gallop at top speed all the time as it makes you a harder target for the pig. There is of course a chance you'll fall off at very high speeds. 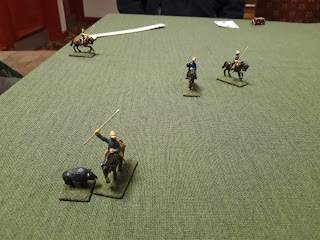 My chap made contact ahead of the rest, sadly my spear failed to damage the pigs heavily boned head, so I didn't even get first blood.  Note the distance between the pursuers, it is very bad form to cut up another rider or pass too close to their right side.  Crashing into another rider is unforgiveable. 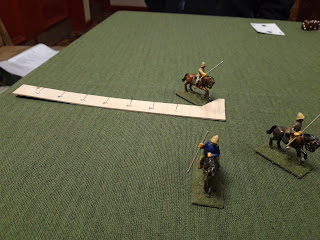 Along with random move distances, turns are moderated by the widget (maximum of 45 degrees per turn, separated by at least 4" move). This makes turning inside a jinking pig very hard, and increases the chance of colliding with another rider. 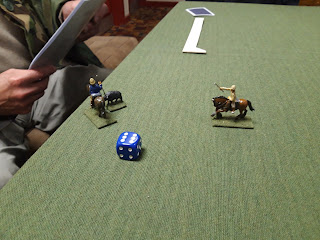 I did manage to catch the pig again at one point, but once again failed to do any damage despite a good hit. In turn the pig mortally slashed my horse and I had to leave to field while it bled to death. Dear me. This particular porker was despatched cleanly by one of the others, and the second one to appear was also dealt with rapidly. 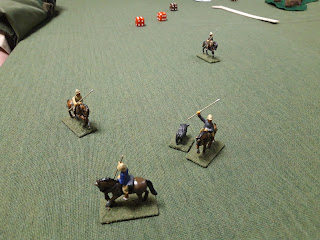 The third pig proved to be a tough old beast, taking multiple wounds and even unhorsing Tim C. We ended up in a complete scrum around it, and the Nawob (Jerry) stretched the definition of 'honourable' riding to the limit as he blocked other riders and cut them up. 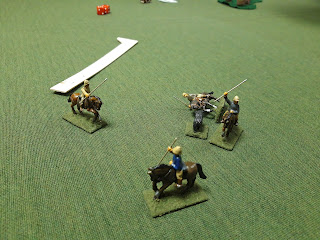 Poor Tims horse lies being gored by the pig while we attempt to finish it off.

We did eventually despatch the monster , and it was time for tiffin and a good sing-song.

That was great fun and we got through three proper hunts in an hour and half. Expect this to appear on the COW session list.